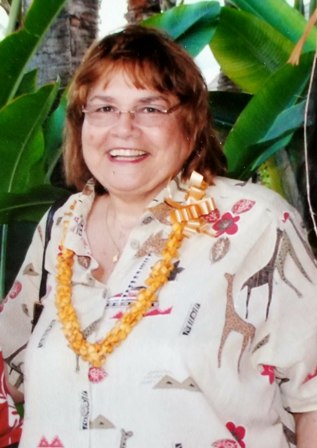 Yvonne Alofa Sorenson, 75 years old, resided in Redondo Beach, California. She passed away at Ronald Reagan UCLA Medical Center in Los Angeles, California on February 7, 2018 at 1:27 pm. She was born on January 23, 1943 in Hawaii to Edward Burns and Talalelei Fonoimoana. She is the sixth child of 13 children. She was married to Dale R. Sorenson in Las Vegas Nevada on February 8, 964. They were married for 54 years. She attended El Camino College in Torrance, California. She worked for the airlines and ran her own in home daycare for several years. She loved to cook and her tropical paradise in her backyard, especially orchids. She enjoyed music which became a big part of her life. She played the guitar, ukulele and piano along with her talent to sing. She was part of the Mormon Tabernacle Choir. She loved her family and friends. She is survived by her husband Dale R. Sorenson Two daughters Cherylynn Gatiuan and son in law Kevin Gatiuan who reside in Hawaii. Tonya Sorenson who resides in Long Beach California. Ten grandchildren: Alec, Dylan, Kira, Quinn and Liam Gatiuan (children of Cherylynn and Kevin) Jackie Bashford, Daniel Sorenson, Mandy and Robby (grandson in law) Thomson, Jamie Clifford, preceded in death Alexis Clifford. Two great grandchildren Kaylee Gonzales and Kaiden Bashford (Children of Jackie Bashford). Yvonne will be missed dearly for her warm and loving smile, her amazing cooking, her vocal talents and most of all the love she shared. She will forever be in our hearts. Service: Viewing February 16, 2018 6:30 to 9:30 pm at White & Day Center, 901 Torrance Blvd., Redondo Beach, California Memorial February 17, 2018 11:00 am Church of Jesus Christ of Latter Day Saints 501 N Rowell Ave. Manhattan Beach, California. She will be placed to rest at Pacific Crest Cemetery in Redondo Beach, California.