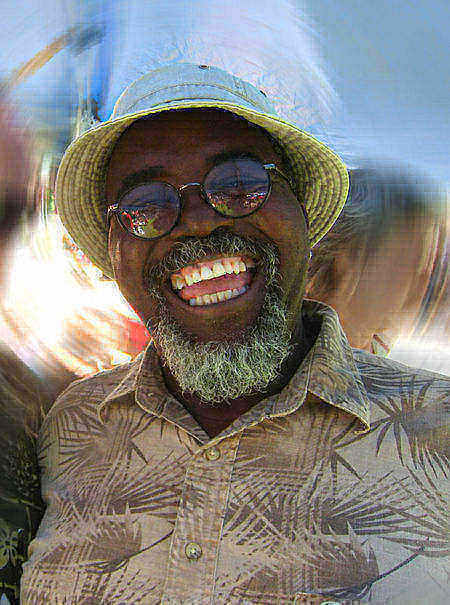 Woogie Thomas, a 32 year resident of Hollywood, Venice Beach and the South Bay, passed away on Wednesday, April 4, 2012 in Hollywood, CA. Born in Jamaica, NY and raised in Hallandale Beach, FL, Woogie was 58 when he died. He attended South Broward High School, Hollywood, FL Class of '74, completed Motion Picture Production Technical Training and obtained Certification in that field. Woogie's first job was as a paper boy in Hallandale Beach, FL, then in his late teens, as a lifeguard at Hollywood Beach, FL. Also, while in his teens and early 20's he worked as an accomplished groom tending thoroughbred horses for renowned horse trainers Howie Tesher of Florida and New York, and the late Eddie Gregson of California. Woogie began his career in the entertainment business as a stagehand with two legendary R and B entertainers, and progressed to working on many notable feature films, television shows, commercials, public service announcements, live concerts, and music videos of every genre as a grip and set lighting technician, especially Rock & Roll and Rap music videos. He recently taught Grip classes at Hollywood Cinema Production/West L.A. College. He worked in the entertainment industry for 30 years. He was a member of the International Alliance of Theatrical Stage Employees, I.A.T.S.E Local 80 Motion Picture Studio Grips, and I.A.T.S.E. Local 728 Studio Electrical Lighting Technicians. Woogie enjoyed going to the beach, playing golf, lap swimming, playing dominoes, listening to music, and going to see his favorite artists in concert, especially Prince and Michael Jackson. He was a fan of the Lakers, Dodgers, thoroughbred horse racing, golf, and sports in general, especially basketball, baseball, football and ESPN. He volunteered time to mentor young people interested in the film business, speaking at local high schools and technical schools. Woogie had a great desire to maintain contacts and nurture his relationships with people as far back as elementary school and from his childhood neighborhood, as well as the numerous people in the entertainment industry, whom he met and developed friendships with while working throughout the United States. He particularly enjoyed encouraging those who were experiencing serious difficulties in their life, especially cancer survivors. Woogie maintained contact with a lot of his South Broward High School classmates, where he was Senior Class President, and attended their reunions. He regularly called, visited and encouraged dozens of people on a monthly basis, of all ages from all walks of life. Woogie was very devoted to his three godchildren, Cheyenne Rodgers, Robert Rodgers, Jr. and Hunter Rodgers of Inglewood, CA. Woogie is survived by his wife of 23 years, Shirley Petite Thomas of Hollywood, CA; four siblings, Howard Hall of Waycross, GA, Rev. Glenette Wilcher, Deborah Thomas, and "Charles" Chad Thomas of Fort Lauderdale, FL; and his nieces and nephews, Kenneth Hall, Jr., Taylor Hall, Herman Wilcher, Jermaine Thomas, Jakari "Larrod" Thomas, Crystal Thomas, Brittney Thomas, Ashley Thomas and Charles "Little Chad" Thomas. He was preceded in death by his parents, James and Frances Thomas; a devoted grandmother who raised him, Mrs. Bertha "Miss Bert" Ford, and two siblings, Kenneth Hall and Rev. Morris Elmore. Woogie's church affiliation was at First Presbyterian Church of Hollywood in Hollywood, CA, where he was a worshipper for 23 years. The Memorial Service will be held at Redondo Beach just south of the Pier on Sunday April 22, 2012 at 3pm. A Reception will be held at the Elks Lodge, 315 Esplanade, Redondo Beach, 90277 from 4 to 6pm. In lieu of flowers, donations may be made to, Shirley Petite Thomas, P.O. Box 237, Hollywood, CA 90078.