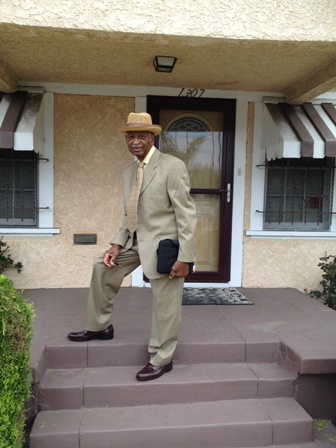 Celebrating the Life and Legacy of Winston Hall Winston Wendell Hall, the second oldest son of Charles and Margaret Hall, was born February 13, 1929 in Toledo, Ohio. He attended Gunkel Elementary, Robinson Jr. High School, and the tenth grade at Libby High School. He attended the Church of God where he was under the pastorate of Dr. C. M. Washington. The family moved to Los Angeles in 1945, and Winston completed his eleventh and twelfth grades, graduating from Francis Polytechnic High School as a scholarship student. Winston went on to earn a Bachelor of Science degree in Nursing from Los Angeles County Hospital and the University of Southern California. Winston worked for five years at the Long Beach Veteran's Administration Hospital. During years four and five, Winston attended Long Beach State College and obtained a teaching degree. He began his teaching career at 116'" Street School for Los Angeles Unified School District. Winston earned a Master's degree in School Administration from Pepperdine University in 1981. Other assignments included Van Deene Elementary School. He retired after 43 years of service to Los Angeles Unified School District. Winston spent his retirement life with his beautiful wife, Edna, playing tennis, fishing, and riding bicycles. He fell in love with Edna and was married to her June25, 1955. To this union were added five children: Michelle, Cheryl, Elise, Winston, Jr., and Michael. This happy union lasted for 51 years. Edna went home to be with the Lord November 24, 2006. Winston gave his heart to the Lord at the age of sixteen at the Wadsworth Church of God. He was deeply committed to the Lord, helping to establish the Neighborhood (Pasadena) Church of God in Pasadena, California, under the pastorate of his mother, Rev. Margaret Hall. He spent many productive years serving the Lord along with his wife. He was a Sunday School teacher and superintendent, deacon, trustee, and choir director at the Pasadena Church of God under the pastorates of Bishop Goff Young and Rev. Tyrone Cushman. At the Wadsworth Church of God, he served as a deacon, Sunday School teacher, choir member, trustee, and a member of the outreach team from I984 to 1993 under the pastorate of Rev. J.T. Robinson. In 1993 the Hall Family moved their membership to the First Church of God (Center of Hope) under the pastorates of Bishop Benjamin Reid, Bishop Gregory Dixon, and Lead Pastor Geremy Dixon. Winston served as a praise team member, choir member, deacon, director of JOY, director of the Board of Directors, and member of the Outreach Team. Until January 2017 when he no longer had the strength to continue, Winston visited and sang to those who could not leave their beds. Winston played several instruments, loved to sing, and wrote many songs. Using his musical gifts, he served eight years as Choir Director for the Interstate Youth of the Church of God. He assisted his family in starting the Hall Family Gospel Team, which traveled across the country, lifting up the name of Jesus in song and ministry. A founding board member of Just Lovin' Music Studios, Inc., Winston Hall passionately gave of his resources to provide quality music education to at risk children. To honor his legacy and ensure the continuation of scholarships to these children, in lieu of flowers, please consider donating to Just Lovin' Music Studios, Inc. at jlmsinc.org. Winston's long years of service for the Lord ended June 11, 2017. He leaves to rejoice in his triumphal home-going three daughters: Michelle Love (Jimmy) of Los Angeles, CA, Cheryl Davis of San Leandro, CA, and Elise Jackson (Wayne) of San Lorenzo, CA; two sons: Winston Hall, Jr. (Nicole) of Winston-Salem, NC, and Michael Hall (Tihya) of Jacksonville, NC; eight grandchildren and five great grandchildren; sisters: Phyllis Sudddeth of Hercules, CA, Shirley Carter of Kirkland, WA, and Gwen Jeffrey of Los Angeles; and cousins, nieces, nephews, uncle, and a host of friends and acquaintances.