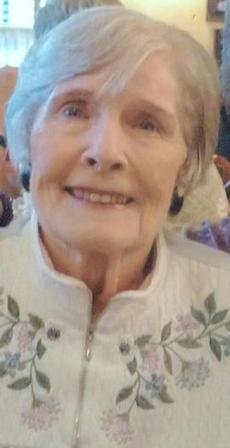 Winn Gracey: Was born in Logan, UT, on April 9, 1926. Attended Stanford University for two years. Attended Wright McMahon Secretarial School, Beverly Hills. Married Richard Lawrence Gracey on June 4, 1949 and moved to Michigan. Moved back to Los Angeles, CA, in 1950. Had two handsome boys, David and Don. Moved to new home in Whittier, CA. Had one little girl, Lynne. Raised the kids for several years in Whittier. To get closer to Dick's work, moved into a new home in Manhattan Beach, CA, in 1961. Attended Orthodox Presbyterian Church, Manhattan Beach for many years, then Rolling Hills Covenant in later years. Lost Dick to an unexpected heart attack on Jan 29, 1980. Became a grandma for the 1st time with the birth of Dave & Diane's daughter, Kim. Became a grandma for the 2nd and 3rd times with the birth of Don's daughters, Shauneen and Kaeleen. During her life, Winn worked: From home as a saleswoman for Sarah Coventry jewelry. As elected President of Republican Women's Club, South Bay. For her brother Conway, Jr., in his medical office and for her father, Conway, Sr. as a work-at-home medical records transcriptionist. For two real estate offices as a secretary. For Douglas Mortuary as office manager. As an executive secretary at Cammacorp and Telautograph. At home in her favorite and best role – wife to Dick, and mother to Dave, Don, and Lynne. Winn is s survived by two sons and a daughter, David (Diane) of Washougal, WA, Don (Geri) of Grass Valley, CA, and Lynne (Phil) of Lomita, CA. She is also survived by her brother Conway (Norma) of Torrance, CA, three grandchildren, Kimberly, Shauneen, and Kaeleen, and four nephews, and three nieces. She was preceded in death by her husband, Dick.