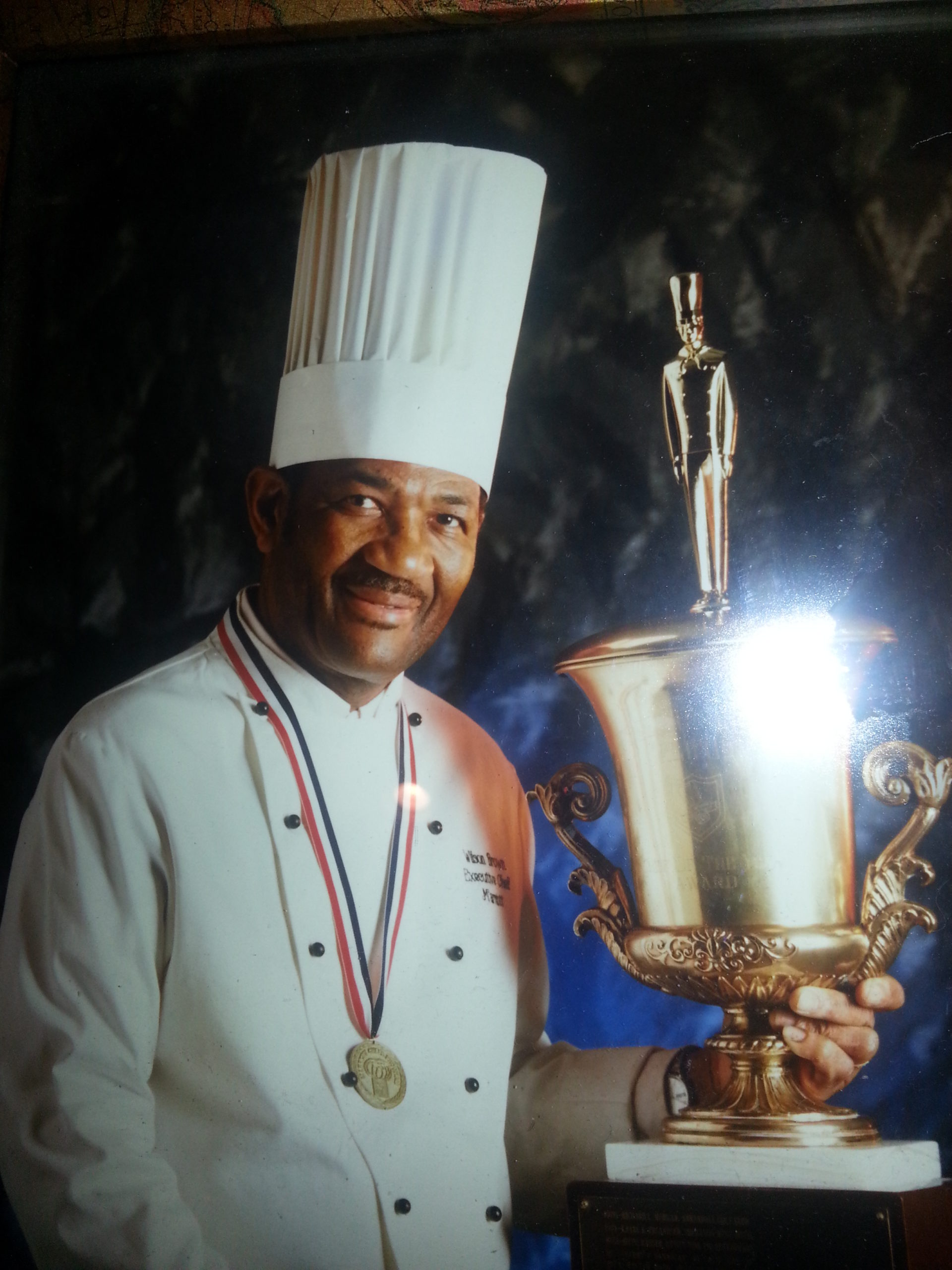 In Loving Memory of:

Chef Wilson A. Brown Sr. was born on the beautiful island of Antigua, West Indies, on August 26, 1936 to Stanley and Pearline Brown. Wilson’s Love of God took precedence over all things in his life. His career as a very young Chef began on the beautiful island of Saint Thomas, at the Sheraton St. Thomas Grand Hotel and Gardens. While traveling, Wilson worked at various hotels specifically in Long Island, New York. Wilson continued working as a Chef on the beautiful Tegra Cruise Line sailing across Europe. Later, he decided to accept an Executive Chef position at the Ambassador Hotel located in Los Angeles, California, where he met and married his wife Ruthann Brown. Wilson decided to enhance his career and attend the world known Culinary Institution in Hyde Park New York, to receive the highest honor in Culinary Arts. He often said that was one of his greatest achievements. Wilson later taught Culinary Arts at Los Angeles Trade Technical College, and took his students across the world to successfully compete and return with numerous gold and bronze medals. Wilson later joined the Chef de Cuisine Association of California (CCAC), in which he became the Vice President of the Western Region and was chosen to write the monthly articles in the CCAC Magazine. In 1989 Wilson was the first African American to win Chef of the Year in the CCAC, which was posted across the USA, and his picture is now located in the Chefs Hall of Fame at the Burbank Culinary Arts Institution in Burbank, California. Wilson worked for the Stock Exchange downtown Los Angeles Marriot Corp. He was President Ronald Regan’s personal Chef at the Century City Hotel. Wilson designed the first Chocolate Oscar for Wolf Gang Puck for the Academy Awards. He also worked with Executive Chefs at the Bonaventure Hotel, Hilton Hotel, etc. He finally decided to take an offer from his mentor, 5 Star Executive Chef Marvin Slaughter, and remained Head Chef over 8 South Bay Hospitals in San Pedro Providence hospital, in which he remained for 18 years retiring in 2009. Wilson was always asked what he majored in, and he would always answer in his soft loving West Indies voice, “My majors consist of hard work and all cuisines.” Outside of his work place, Chef Wilson and his wife and children owned Browns Catering Service for over 30 years. He catered and serviced large weddings, city and governmental events, quinceaneras, baby showers, and many more events across southern California.

Chef Wilson loved and was extremely dedicated to his Church and Church family, Bethany Church of God and Christ, located in Los Angeles, California. He always served a 5 star meal after Church dinners whenever needed. Chef Wilson Brown would whisper to his wife in the Church dining area, “I think some of the people are coming off of the street and that’s a Blessing for the Church.” With a loving soft smile of happiness, he often gave cookouts and parties at their beautiful home in Gardena, California. Chef Brown always had amazing private times alone with the love of his life, his wife Ruth, traveling around the world and spending lots of time at their beautiful Las Vegas Time Share and Resort. After retiring from San Pedro Hospital in 2009, on a daily basis he would ask his granddaughter China for a set of good lottery numbers. He would walk to the neighborhood corner store, and play of course, his birthday 1936 and the 5 numbers from China.

Chef Brown also enjoyed nurturing his own vegetable garden, and would often give collard greens too his neighbors in Gardena. He loved his female dogs Precious and LuLu whom passed in 2015.

Sadly in 2014, Chef Wilson Brown was diagnosed with Alzheimer’s disease and passed away in his sleep on September 9, 2020.

2 Timothy 4:7: “I have fought the good fight, I have finished the race, I have kept the faith.”

The family of Chef Wilson Brown Sr. would like to thank you for your prayers. May God continue to keep everyone safe.