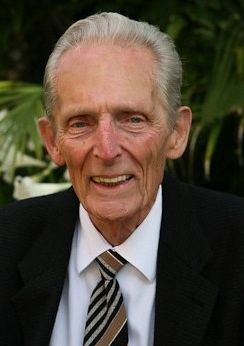 William Robert Becker passed away peacefully on December 21, 2015, with cherished family members close. He was 91 years young. "Bill" had lived in Manhattan Beach, the little town he loved so much for 67 years, since marrying his beloved wife Geraldine. Born in San Francisco to Madeline and William Becker, he moved to Inglewood, California just prior to starting kindergarten where he attended Centinela School and Inglewood High. He joined the army in 1943, and was a member of the 16th Armored Infantry Battalion under General Patton in World War II, where he saw active duty in France and Germany. He received the World War II Victory Medal, Good Conduct Medal, European African Middle Eastern Medal and American Campaign Medal. He returned home after the war and attended business school at USC, before beginning a long, successful career in banking, becoming a Regional Vice President for Crocker Bank. He retired early in 1982 to pursue his dream to be part of the downtown Manhattan Beach community, as the owner of the Beach Store. Throughout his career, volunteer service was very important to him, serving as president of the Rotary Club, and as a board member of both the American Red Cross and the Salvation Army. Bill enjoyed special times traveling the world with his family. He loved to read, was an avid gardener and was a parishioner of American Martyrs Catholic Church. Bill leaves behind his son Paul Becker (Cari Buck) and daughter Diane Giaquinta, his grandchildren Nicole Konca (Turan Konca), Joshua Smith (Michele Smith) and Isabella Giaquinta and great-grandchildren Mason and Kyra Konca and Dane and Tanner Sierra. He was preceded in death by his loving wife Geraldine Becker, daughter Denise Smith and son-in-law Maxwell Smith. Bill was a fixture in town and was much loved in the community. He will be remembered as a gentle, kind man and devoted husband with a true spirit of fun. His memorial service will be held at American Martyrs Church on Thursday, January 7th at 1:30 pm.