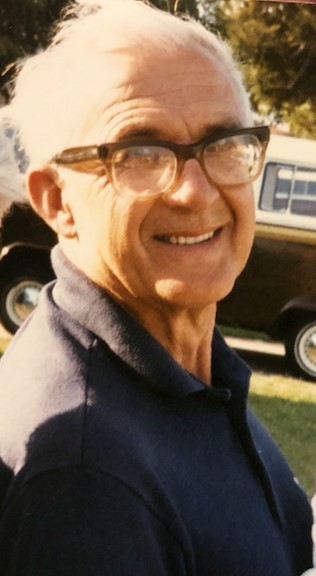 William Holyk passed away very peacefully at his home in Los Angeles from congestive heart failure.  He was 99 years and 113 days old. Kathleen, predeceased him by a year and a half.  Bill was also predeceased by his parents Alec and Paraska, and his brother John.

Bill was born on December 25,1920 in Coleman, Alberta, Canada, a small mining town in the Canadian Rockies. During his school years, he was very active.  He climbed Crow’s Nest Mountain, roamed the back-country, handcrafted slingshots and guns, raided local gardens, and helped in his parent’s store. He learned to drive his parents’ delivery truck at twelve.

Kay and Bill were married February 7, 1942.  The next day they left for service in the Royal Canadian Air Force.  Bill was trained as an airplane mechanic in Ontario, readying the planes for takeoff to the European theatre.  He was very proud to be a WWII veteran.

After the war, he returned to work at his father’s general store in Coleman before starting the second Holyk’s store in town.  He was a respected businessman and leader in the community.  Bill and Kay were the proud and devoted parents of four daughters: Sandra, Cheryl, Holly, and Karen.  They are also survived by six grandchildren and four great-grandchildren.

In 1960, Bill sold his grocery business and moved the family to Los Angeles.  He found work at The Boys Market as a meat cutter, and then remained as a manager until he retired.

He and Kay supported the Dominican Guild tirelessly through rummage sales, candy sales, and collecting aluminum cans.  And somehow in the midst of this, he wrote stories chronicling memories of family life.

His retirement years provided opportunities for some travel to China, Japan, Taiwan, South Korea, and Thailand as well as Texas, Louisiana, Arizona, New Mexico, New York, Massachusetts, D. C., Alberta, Ontario, and British Columbia.  Many neighbors enjoyed seeing him at his workbench and in the garden and sought him out for advice, tools, and dog treats.   Children loved his unique holiday decorations.  He enjoyed telling the story of how when he was 97 the police stopped, told him to get down from the ladder, and finished putting up the lights on the palm tree for him.   In spite of his macular degeneration and hearing loss, he continued his active lifestyle to the end, including using a circular saw, a grinder, and electric hedge trimmers while on a ladder.  He loved sharing the new stories and information from his Braille books.

He was grief stricken at the death of his beloved wife of 77 years; nonetheless, he continued to exercise at the YMCA,  go out to eat with family and friends, and decorate the garden with old film reels and errant golf balls..  He remained positive and grateful even as he began to experience decline, seeing the good and beauty of each moment he was given.

We are grateful for the gift of Bill Holyk.  He taught us to love to our fullest not counting the cost, to see the good in everyone, to enjoy the little things in life, and keep on going…

Even though they donated to over 30 charities annually, here are three of their favorites should you wish to donate in Bill’s name: