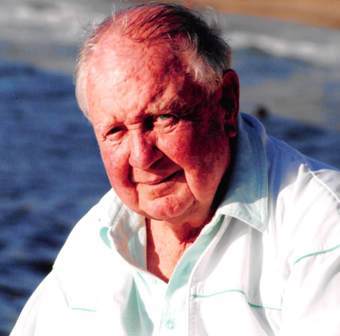 William Harold Farber 1926-2017 William Harold Farber passed away on February 9, 2017, in Parker, Colorado. Bill was born on May 7, 1926 in Oak Park, Illinois. He married Eleanor Kramer on September 11, 1948, and they moved to Redondo Beach, California in 1954, where they raised their four children and resided for 60 years. Bill was a member of the Army Air Corp (pre Air Force). He attended UCLA and Arizona State College and worked in the aerospace industry. He went on to run a successful alarm company, Sentinel Signal Systems, for more than 30 years. He was a published author and an avid golfer. He is preceded in death by his wife, Eleanor, and his brother, James Farber. Bill is survived by his children: Candace Farber, Clarissa Shibata (Bob), William, and James; grandchildren, Denise, LeeAnn, Jeffery, Jonathan, Erin, and Tatiana; and 7 great-grandchildren. A gathering of family and friends will be held on Friday, February 17, 2017, with a Rosary at 1PM and a Funeral Mass at 1:30PM at St. James Church (415 Vincent St., Redondo Beach).