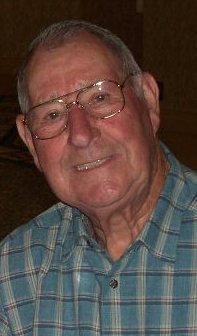 William "Bill" Bonin went home to the Lord on February 14, 2014. Bill was born August 14, 1923 in Sanborn, Wisconsin and grew up in Trout Creek, Michigan. He spent a year in the CCC at Camp Sidnaw, Michigan and then hauled lumber for the railroad until Uncle Sam called him into service in 1943 assigned to the (Army) 382nd Anti-Aircraft Artillery Battalion. On August 14, 1945 (his birthday), while stationed in the Philippines, news came that the war had ended. He received an honorable discharge in 1946. After moving to California, he married Helen Mary Scott in 1950 and they were married for 39 years until her death in September 1989. Bill worked for the City of Redondo Beach and then Powerine Oil Company in Santa Fe Springs until his retirement in 1985 after 29 years of service with them. He married Marilynn Mustain in November 1990. Bill served as a Eucharistic Minister and spent many hours doing volunteer work at St. Catherine Laboure Church. He was a 50 year member of the Fraternal Order of Eagles (Redondo Beach 935) holding many offices including 2 terms as Worthy President. He was also a long time member of the VFW and Moose Lodge. Bill was an avid bowler belonging to several leagues including the Roaring 90's, Wednesday Mixers, Traveling Eagles and Eagles I. He served as League President for a number of years in the Eagle leagues. He also enjoyed playing pool, shuffleboard and cards (especially cribbage), watching Angel's baseball, gardening and playing the lottery. He loved music of the 30's and 40's and had been known to break out in song at a moment's notice. One of Bill's greatest joys was spending time with his 5 grandchildren. Bill is survived by his wife Marilynn, sister Evelyn Pittsley (98) of Inez, Kentucky; step-daughters Michelle (Steven) Gerry of Rancho Santa Margarita; Maureen Harris of Torrance; grandchildren Michael and Olivia Gerry; Amber, Cassie and Thomas Harris. He also leaves many nieces, nephews and wonderful friends. Viewing will be Friday, March 7 from 4-8 PM at Rice Mortuary. Funeral Mass will be Saturday, March 8 at 11 AM at St. Catherine Laboure Church followed by a reception in the Church Hall. Interment will be at Pacific Crest Cemetery after the reception.