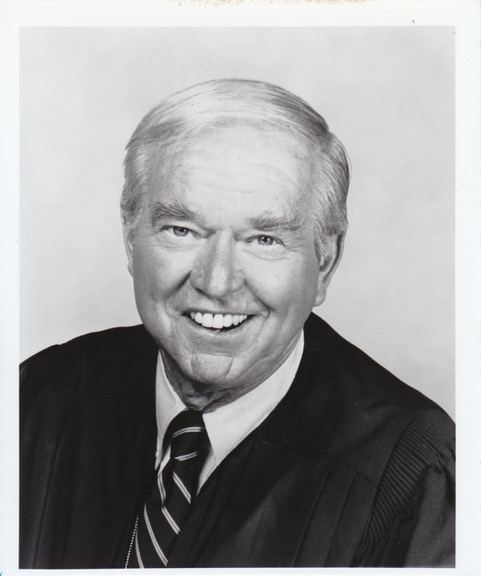 Judge William B. Keene passed away on Wednesday, January 10 at his home in Manhattan Beach, California, surrounded by his family, one month shy of his 93rd birthday. He was born on February 23, 1925 in Youngstown, Ohio to James and Effie Keene. Accolades abound but we will remember him most for his love, his charm, his generosity and his guidance, through wisdom and example. He loved people and was appreciated by all who knew him for his warmth and friendliness. His charisma pervaded any room he entered punctuated by that unavoidable voice. He was known as “The Commander”, a sobriquet acquired at Emerald Bay Boat Camp, Lake Tahoe where he, family and friends went summer after summer. He commanded, but always with respect. A resident of Manhattan Beach for almost 70 years he, along with Pat, his beloved wife of 67 years, was the soul of 29th Street. A word he loved was “Mensch.” He epitomized the word, defined as “someone of consequence, someone to admire and emulate, someone of noble character, possessed of great dignity and with a sense of what is right.” Repeatedly present at significant events, his was a Forrest Gump-like story. But his box of chocolates was one of intention, determination and talent rather than chance: He was present in Normandy on D-Day plus six on Omaha Beach, he was UCLA student body president, he hired coach John Wooden, he was in the first graduating class of the UCLA law school, he campaigned for JFK, he began the trial of Charles Manson, he wrote the Benchbook on California criminal law and even in retirement he shone as the star of the revival of “Divorce Court” on television. But mostly he was our star. His greatest accomplishment in his eyes was his family. He was a generous and loving husband, father and grandfather. His career trajectory was classic yet atypical and extraordinary. He attended Alhambra High School. At UCLA he joined the Kappa Sigma fraternity. Following UCLA Law he became a Deputy District Attorney in Los Angeles, practiced private law, was appointed to the South Bay Municipal Court and Los Angeles Superior Court. He was UCLA Alumni Association President, a California Regent and Dean of the Judicial College of California. He was a co-founder of the International Academy of Trial Judges. He received numerous awards, including first recipient of the Los Angeles County Bar Association Outstanding Trial Jurist Award. On July 4, 1947 he made the best decision of his life, marrying the love of his life, Patricia Danskin. He led an adventurous, joyful life, living every moment to the fullest. He piloted his Nordic Tug “Bigby”, throughout the San Juan Islands and regularly to the Fourth of July cove in Catalina. He and Pat delighted in traveling the world together. He lived his life “his way” as Frank Sinatra would say! Bill’s eloquent oratory was renowned and he was frequently asked to perform weddings. He was also often asked to give the eulogy for close friends. His go to quote is fitting here. It was paraphrased from a journalist writing about George Gershwin’s passing: “Judge William B. Keene died last week. But I don’t have to believe it if I don’t want to.” He is survived by his son, Andy (Ursula) of Switzerland, daughter Kerry Keene Padilla (Joe), grandchildren Kevin, Brian, Laura and Lynn Keene and Chelsea Formiller. He is predeceased by his wife Patricia, daughter Laura Cathleen, and siblings James II and Ted. We hope you are rallying the troops with “Up ’n at ‘em, let’s go Bruins!â€¦once around the island” followed by a breakfast of grits and eggs, topped off by a chorus of “One Evening in October”, with Mom at your side, of course!