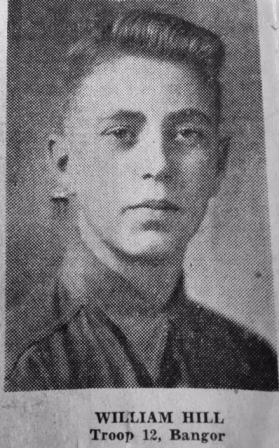 William Barlow Hill III Born March 15, 1930. Died May 19, 2016. Born in the great state of Maine on the Ides of March, 1930, W.B. Hill, the youngest of 3 children, with blonde ringlets, was adored by his family: mother, Sara Louise Parker (Hill) Umphrey (deceased); father, William Barlow Hill Jr. (deceased), and his doting sisters, Dorothy Hill Boland (deceased), and survived by Barbara "Penny" Fyske Eynon. He had an amazing life. He had a great life. He did everything he wanted to do. Son of a railroad man, the Bangor & Arostook, he grew up in the Maine woods, always feeling the draw of the sea, which was the joy of his life. Bill, an Eagle Scout, attended grammar school and high school in Bangor, where he was a basketball star, being on the first team to play in the state finals. He attended the University of Maine, Onoro, and graduated from Denison University in Granville, Ohio, with a degree in Speech and a passion for debate. Upon graduation, Bill married his beautiful college sweetheart, an actress, Sara Helen Lashar, in York, Pennsylvania. They were members of Denison University's illustrious "Sunrise Sippers Club", which met on the steps of Swasey Chapel Sunday mornings, as other students went to the chapel to pray. He had an illustrious business career in castings and forgings in steel and titanium, working with companies such as Steel Improvement Forge Company, Fansteel, Teledyne/ Teledyne Golf, TiLine, and Precision Cast Parts. He created his own company, W.B. Hill & Associates, which worked with General Electric and Honeywell, specializing in aerospace and selling titanium castings for jet engine parts. He was invited to attend the War College in Washington, D.C.; he adored the British Virgin Islands and the Moorings Resort, his second home; he loved lobster at Barnacle Billy's and popovers at Acadia National Park, blueberries, Frank Sinatra, and Jimmy Buffett. His family was among the first settlers of the town of Fairfield, Connecticut, and were among the founders of the Audubon Society and Yale College. His namesake was Joel Barlow, the famous American Patriot, and friend of Thomas Paine. His family entertained the likes of Eleanor Roosevelt and Amelia Earhart. A sailor of Atlantic crossings has crossed to another shore, and will be dearly missed by all who knew him, and he will miss the sight of the sea and islands and ships and the shapes of the clouds against the sky. He is survived by his loving wife Sara Lashar Hill. He was the proud father of, and is survived by, three children, in succession: Sara Jill Hill (Emory Wallace White III); Deborah Hill Herbertson (Rand Scott Herbertson) and children Joshua Rand and Sara Alexandra Herbertson; and William Barlow Hill IV; also survived by numerous nieces and nephews, who admire him and will miss him very much. The Service was held at St. Francis Episcopal Church on Friday May 27, 2016, at 3:30pm. Burial was private, at sea. In lieu of flowers, donations may be made to the Rev. Paula Vukmanic's discretionary fund, in honor of his respect and admiration for her spiritual guidance.