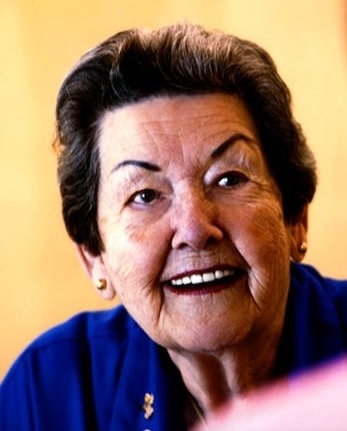 Wanda Damberg, a World War II prisoner of war, an avid world traveler, and a longtime hospital volunteer, died in hospice care on Sept. 6, 2016, at the age of 95. Wanda was born Wanda Olivia Werff on June 3, 1921, in Manila, Philippines. She moved to Holland with her parents and sister, Alice, when the girls were school age and moved back to the Philippines in 1937 due to her father's work for the Dutch consulate. In 1941, at the outbreak of WWII, the family was interned by the Japanese at Santo Tomas. During her internment, Wanda worked in the camp hospital and risked her life to help smuggle in needed medicines. The family was transferred to the Los Baños camp in 1944, and three months later they were liberated by American forces in a heroic military operation. After the war, Wanda worked in Tokyo and testified at the War Crimes Trials. Wanda met Col. Carl Damberg, a West Point graduate, and they married three months later. Carl's assignments took them back to the United States, where Wanda became a U.S. citizen, reveled in military life, and raised four children. In 1964, the family settled in Palos Verdes Estates, Calif., where Wanda lived for 52 years. After her youngest left for college, Wanda began her volunteer career, working for 36 years and 50, 000 hours at Little Company of Mary hospital in Torrance. With her fluency in English and Spanish, and knowledge of the computer system, she was a valuable resource at the information desk. She also knitted numerous blankets for babies born at the hospital. In 1990, Carl died of pancreatic cancer. Wanda's wanderlust took her to all seven continents. Her trips included three safaris, as well as many summer trips with her children and their families. Her experiences as a POW were described in a book produced by her children called "Courage and Deliverance: Our Mother's Story." That led to numerous speaking engagements and several interviews and profiles in newspapers, magazines, and on television. Wanda was a fiercely independent woman who lived on her own, continued to drive her 1987 Oldsmobile Cutlass Supreme, and pursued her volunteering and bridge playing until her final weeks. Her huge love of life will be remembered and cherished by those who traveled with her, volunteered with her, and most of all by daughter Alice Ewing, son-in-law Bob, and grandson Christopher; son Philip Damberg, daughter-in-law Claudia Lohnes, and granddaughters Sonia and Isabel; daughter Louise Damberg; and son Richard Damberg, daughter-in-law Sarah Ball-Damberg, and granddaughters Hannah and Marika. The funeral will be held at St. Lawrence Martyr Catholic Church, 1940 Prospect Ave., Redondo Beach, CA 90277 on Friday, Sept. 16, at 3 p.m. A reception will follow at HT Grill at 1701 S. Catalina Ave., Redondo Beach, CA 90277. Those who wish to honor her memory may make a donation to the Providence Little Company of Mary Foundation by mail at 4101 Torrance Blvd., Torrance, CA 90503, or via the website at www.providencepowerofgiving.org.