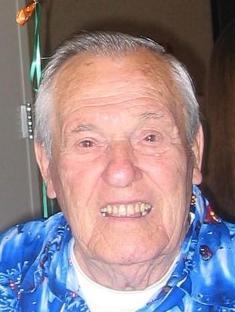 Walter Lawrence Mason, a 59 year resident of Manhattan Beach, passed away on Tuesday, November 26, 2013. Born in Lawrence, MA, Walter was 96 when he died. Walter had served in the Navy during World War II and was a member of American Martyrs Catholic Church. Walter lived his life as a beloved husband, father and grandfather. Walter is survived by daughters, Gail Chubbuck of Granada Hills, CA and Linda Delle of Mar Vista, CA and two grandchildren Brett Coburn and Heather Black., He was preceded in death by Marcelle Mason his wife of 63 years, five brothers and sisters Frederick Jr, Raymond, Irene, Marion, James and parents, Elizabeth and Frederick Mason. Walter was a prototype precision machinist at Hughes Aircraft for the last 25 years of his career. He was an avid fisherman of both fresh water and deep sea fishing. Walter and Marcelle Mason also invested in real estate in the South Bay area since the 1950's and owned two restaurants in Redondo Beach in the early 1960's. The Service will be held at White and Day Mortuary in Manhattan Beach on Saturday, December 14, 2013 at 11:00 AM. A gathering of family and friends will follow at a reception at a local restaurant. In lieu of flowers, donations may be made to Child Fund International.