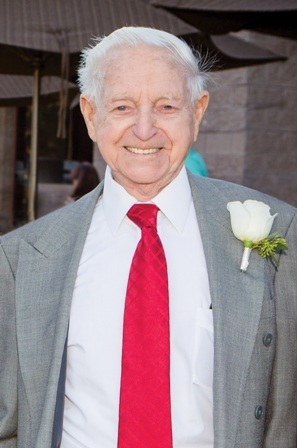 Walter Kohlhepp, loved his family and the LA Dodgers. He was a hardworking, loving and generous man. He will be missed by all who knew and loved him. Walter H. Kohlhepp, age 91, died on Tuesday, June 13, 2017 at his home where he lived with his daughter Lynn her husband Terry Keyes and their sons Sean and Ty. During his last week, he was surrounded by the love of his children, grandchildren and great grandson. During his last few days he was lovingly and tenderly cared for by his sons Joseph, Patrick and Paul. He was born on May 5, 1926 in East Brunswick, New Jersey, to Dora and George Kohlhepp and was the third son of four children. Walt joined and served in the Navy from 1943-1946. He started working as a sheet metal apprentice and continued until he became a journeyman in that trade. In 1947, Walt met the love of his life, Annette Brown at a diner where he would stop for a piece of pie or a grilled cheese sandwich. They became engaged in May, 1950. On April 12, 1952, Walt and Annette married in a Lutheran Church in New Jersey. After their honeymoon, they rented a house in Spotswood, New Jersey.In 1953, Anette and Walt left the east coast and moved to the west coast, to California. In 1954, Walt began his sheet metal career with A&S Air Conditioning, 37 years with A&S. First as a Foreman then eventually the superintendent for A&S. Walter is survived by his nine children, Joseph (Allison), Kathleen, (Jan), Lynn (Terry) Keyes, Patrick, Elizabeth (Dave) Hanson, Paul (Amy), Rob (Laurie), John (Victoria), and Grace. His 16 grandchildren, Amber, Lucas, Robert, Andrew, Christopher, David, Jake, Jeremy, Sean, Josie, Adam, Mattie, Ty, Ben, Oceana and Annette and great grandson, Lincoln. He was predeceased by Annette (died March 28, 2002). A celebration of his life will be celebrated with a 9:30 morning Mass at American Martyrs Church in Manhattan Beach, CA. It will be followed by a reception there. Burial will follow at Holy Cross Cemetery in Culver City, CA. A special thank you to Hospice Touch of Santa Ana for their care and support.