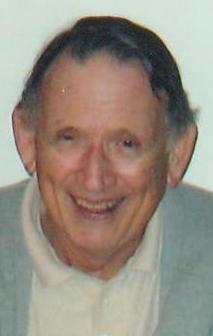 Vroman Walter Riley May 8, 1925 — February 12, 2014 Vroman Riley passed away February 12th, at his home in Redondo Beach, California, beside his wife of 64 years, Cynthia. Vroman was born in Chicago, Illinois to Walter and Irene Riley, the oldest of two children. He was raised on the South Side of Chicago, a childhood spent playing baseball and football, attending movies, and greatly anticipating summer circuses and fairs. He met Cynthia McCarthy toward the end of high school and graduated in 1942. Vroman enrolled at the Illinois Institute of Technology, but after his freshman year, having turned 18, he enlisted with the Navy, and fought in World War II from 1943 to 1945. After training in electronics, he was assigned to a destroyer escort in January 1945, and served out the remainder of the war in the South Pacific. Upon his return to Chicago, Vroman re-enrolled at IIT. He graduated in 1949 with a degree in electrical engineering and married Cynthia that fall. He began work at the Chicago Transit Authority and in 1950, Vroman and Cynthia's first son, Mark, was born. Over the next sixteen years, the family grew to eight. Following Mark were Kevin, Lynn, Neil, Patrick, and Matthew. In the mid-'50s, Vroman took jobs at Motorola and RCA, and, accordingly, the family moved from Chicago to the North Shore suburb of Wilmette and then to the Philadelphia suburbs of Devon and Wayne. Later, on account of several jobs related to the cable television business, the Rileys lived in South Pasadena, CA and Plano, TX. Once the kids had grown and Vroman retired from Rockwell (1989), he and Cynthia moved to a series of seaside homes in Cambria, CA, before settling down permanently, in 2003, in Redondo Beach, CA, with their daughter Lynn and her husband Carl. Vroman is survived by his wife Cynthia; sister Denise, of Evanston, IL; son Mark, of Oakland, CA; daughter Lynn (Carl), of Redondo Beach, CA; son Matthew (Dina), of San Antonio, TX; daughter-in-law Brenda, of Manahawkin, NJ; daughter-in-law Patti, of Manhattan Beach, CA; granddaughter Dana (Blake); granddaughter, Frances, grandsons Daniel, Sean, Alec, and Ian; and many other family members and friends. He was preceded in death by sons Kevin Riley, Neil Riley, and Patrick Riley. The service will be held on Friday February 21st, at 10 a.m. at St. Lawrence Martyr Church, 1900 S. Prospect Ave., Redondo Beach, CA 90277. In lieu of flowers, donations can be made to Torrance Memorial Hospice. Several options are available: http://torrancememorial.org/Giving/Ways_to_Give.aspx May the roads rise to meet you, May the winds be always At your back, May the sun shine warm Upon your face, The rains fall soft Upon your fields, And until we meet again May God hold you in the hollow Of his hand.