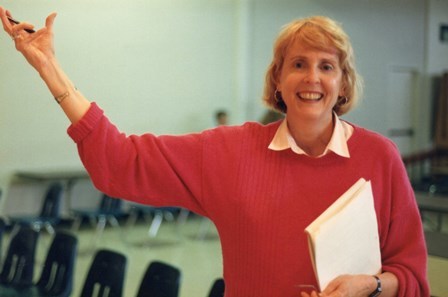 Virginia "Ginny" Burns Kelly passed away on Sunday, January 17, 2016. She is survived by her husband of 56 years, Thomas P. Kelly, Jr.; her children, Ambassador Thomas P. Kelly, III (Elsa), Joseph J. Kelly (Diana), Regina A. Kelly, John C. Kelly (Phil), J. Matthew Kelly (Lynn), Elizabeth T. Kelly Barone (Philip), and William F. Kelly (Fannie); her grandchildren, Sean and Chantal Kelly, Joseph, Jr. and Veronica Kelly, Amelia and Genevieve Farley, Ava Kelly, Hudson and Riley Barone, and Vivienne and Maggie Kelly; and her brother, Chris Burns (Suzie), and sisters-in-law Anita and Nancy E. Burns. She is preceded in death by her parents, Rose Frawley Burns and Clarence Joseph Burns; her brothers, Jerry and Bill Burns; her nephews, Peter L. and Rob Burns; and her nephews-in-law, Eddy Neff and Mark L. Paris. Ginny was born in New Rochelle, New York on August 2, 1935. Her parents, Rose and Joe, were the children of Irish immigrants. She attended Catholic grammar school in Pittsburgh, Pennsylvania, where she excelled at tennis—she was a local junior champion—and piano. In 1947, her family moved to Rhode Island. She attended Barrington High School, graduating in 1953. She was an honor student, a competitive athlete and an active participant in a wide variety of extracurricular activities, including drama, newspaper, yearbook, and student leadership. Throughout her childhood and adolescence, Ginny spent her summers as a camper and then counselor in New Hampshire at Waukeela Camp for Girls—an experience and place very close to her heart, and deeply connected to her family. Ginny continued her education at Trinity College in Washington DC where she majored in English, developed a passion for the theater and graduated in 1957. She continued her study of theater at the American Academy of Dramatic Art in New York City. In 1959, she graduated from the Academy, and received its prestigious Jehlinger Award, which is presented each year to the most promising actress and actor. Her actor counterpart for the Jehlinger Award that year went to her close friend, Robert Redford. Ginny went on to work in theater in New York, got her Actor's Equity Card, and toured with Gloria Swanson. She met her future husband, Tom, at a gig for the Casino Theater in Newport, Rhode Island; they were married in 1960. When Tom was nominated for an Oscar in 1969, Tom and Ginny moved their growing family to Manhattan Beach, California. In the ensuing years, Ginny became a Southern California super-mom, nurturing her seven children through intellectual, athletic, and creative pursuits. She held family dinner to be a sacred ritual in which all gathered and shared their day. But then she would put on records after the evening meal so her tribe could dance around the living room—as long as each child would "freeze" between songs. She was an exuberant celebrant of each and every holiday, major or minor. She loved to be silly and playful with her children—brogues were encouraged on St. Paddy's; household paintings were turned upside down on April Fool's. She simultaneously set the bar high for her children in terms of excelling in schoolwork, serving the community, and moving beyond the pleasure and blessing of beach town life to see the world, have adventures, and get involved. The center of Ginny's community life during her 47 years in Manhattan Beach was her Catholic church, American Martyrs. She drew strength from her parish life, and constantly paid that strength forward through service to others. When the bottom fell out of the aerospace industry in the 1970s, Ginny spearheaded an employment-networking project headquartered at the church. For several years, Ginny worked with other parish leaders to run and direct summer programs that brought together children from Manhattan Beach and South Central Los Angeles. She leveraged her love of theater, writing, and music through creating and directing several original works, including six musicals performed by children across the grades of American Martyrs School, and the musical Moving West performed by adult parishioners. Her close collaborators on these projects included musical director and composer Bill Svarda, playwright and lyricist Roberta Stuart, and artist and designer, Alice Greene O'Neil—all of whom she admired, respected, and loved as they worked together to involve parishioners in singing, acting, and storytelling to brighten the lives and hearts of local audiences. Ginny also shared her creative gifts on the liturgical front, writing original hymns for special masses, including seasonal events like Las Posadas. With composer Bill Svarda, she created "The Way of the Cross," a musical Lenten liturgy reenacting the Stations of the Cross that the late Paul Salumnovitch of the LA Chorus called "extraordinary." For twenty years, Ginny directed this unique liturgical event, which was performed each Holy Week by the eighth graders of American Martyrs School, where she also taught English. In addition to all her local parish work, Ginny also served as a community leader on several Catholic boards and commissions throughout the Los Angeles diocese. Virginia "Ginny" Burns Kelly was a loving daughter, an outstanding mother, grandmother and aunt, an adored wife, an incredible sister and a good friend. She changed us with her love, her gentle soul, her faith, and her enduring optimism, and we will miss her dearly.