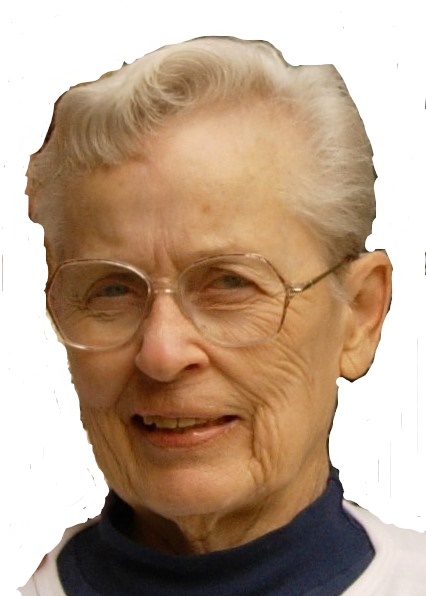 Ginny was born in Sioux City, Iowa to Paul and Blanche (Mimi) Buckio Ellis on February 16, 1925.  After her father died very young of a sudden heart attack in 1939, her ever courageous mother packed the family and all they could carry onto the train and moved to Beverly Hills, California. There Mimi pursued apartment management training and a new life for her and her children. Ginny, just 14 and youngest of the four children, enrolled with sister Bette in Beverly Hills High. She admitted to being a little star struck around some of her already famous classmates.

After graduation in 1942, Ginny attended Berea College in Kentucky. But she missed her family and the California lifestyle, so she returned home to work as a bookkeeper and accountant for the next 46 years. However, she always regretted not finishing her education, so in 1991 at age 65, Ginny earned her Bachelor of Arts degree from California State University – Dominguez Hills.   She was most proud of this accomplishment, as were all of her family and friends.

Since her official retirement coincided with her college graduation, Ginny used her new education to pursue what she loved doing, not necessarily what she could get paid to do. She had been writing poetry since she left Iowa, but now redoubled her efforts. She became a self-taught webmaster so she could show her work. She took up drawing and painting to illustrate her poems.  She made new friends online, who set her poems to music or added their own illustrations to her website. She even expanded one of her poems into a full length book, “Liz, the Condo Cat”.  By the time of her death, Ginny had a portfolio of roughly 8 thousand poems. Ten of her best were published in various anthologies like the “Chicken Soup for the Soul” series.

Ginny especially enjoyed afternoons poolside at her Del Amo co-op with other longtime residents, discussing current affairs and the latest improvements in computing. Often these discussion would include a glass of wine. If the talk turned to politics, she often shared her fervent wish to cast a ballot for the first woman President of the United States. That wish wasn’t fulfilled but she was very pleased to see the first woman VP win election in her last days.

Ginny did not suffer fools gladly but underneath the skin of a lioness beat the heart of a pussycat, on full display whenever she was doting on one of her own sweet kitty cats or someone else’s puppy.  Ginny was known to pinch a penny, yet she was also incredibly generous to her chosen charities, especially the Braille Institute, the Salvation Army and the Animal Humane Society.

and many grandnephews and grandnieces and friends

A “Celebration of Life” will not be held at this time because of COVID – 19 restrictions.

The Ellis, Dahl, Juleen and Ludwig families would like to express our heartfelt gratitude to those who cared for Virginia, including Ida, Carolyn, Dorothy, Ges, Sally and all the wonderful nurses and caregivers at the Huntington Retirement hotel and the Agape hospice.  We thank you for the kindness, patience and the love that you gave to Virginia and her surviving family.