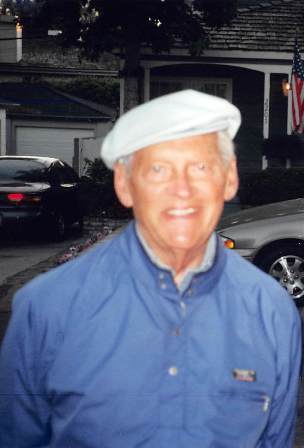 Vincent Honnold died peacefully in his home on April 22, 2017, not long after turning 93. He dedicated his life foremost to his family and Catholic faith. Vincent also had a passion for science which he displayed at an early age with his keen interest in electronics and ham radio, later during his long aerospace career, and in retirement by self-study of relativity theory. His wife Peggy predeceased him by 26 years. Vincent was born in Los Angeles, attended LA High, Caltech, and received a PhD in physics from Notre Dame University. During World War II he served in the U.S. Army Signal Corps and was stationed in northern India. He liked to tell stories and show pictures from his wartime experience, including a picture of himself, taken while his unit was deploying to India, sitting astride a camel in Egypt in front of the pyramids. After completing his schooling, he worked as a civilian with the Defense Department at China Lake Naval Weapons Station in the Mojave Desert. In 1960 his young family moved to Manhattan Beach where he and Peggy built a home and raised their children. Vincent lived in the house for 57 years. He worked as a project scientist for several aerospace companies in the Los Angeles area during the remainder of his career, including Hughes Aircraft, TRW and Rockwell. Vincent was a faithful parishioner of American Martyrs Church in Manhattan Beach throughout this time and served as a Eucharistic Minister for many years. He loved reading not only about science, but also history and politics. He will be dearly missed and is survived by his five children, Maryanne, Susan, Vincent, Michael, and Teresa, 11 grandchildren, and 9 great grandchildren. Services will be held at American Martyrs Church on April 27 at 10:00 am and Holy Cross Cemetery at 1:00 pm. In lieu of flowers, please consider a donation in Vincent's memory to Saint Anne's Maternity Home, 155 North Occidental Blvd., Los Angeles, 90026.