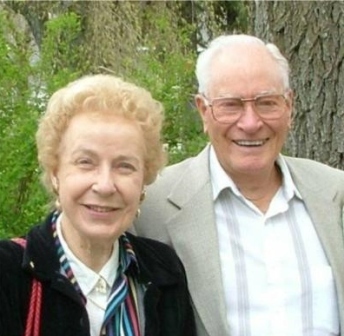 Vernon E. Benson Vern Benson, 96, a shining star on earth, joined his wife in heaven after a short struggle following a stroke. He passed away peacefully, surrounded by the close support and love of his family and friends on Thursday, August 13, 2015. Vern was born in Wausa, Nebraska to Hjalmar and Lilly (Oberg) Benson, and grew up with three sisters and two brothers on a nearby farm. After Vern graduated high school, he attended Midland College in Freemont, Nebraska, where he graduated with a Bachelor's degree in 1940. He taught high school for a few years before becoming a USAAF Cadet, training at the University of Chicago Meteorological Institute as a weather forecaster from 1941 to 1943. Following that training, Vern joined the Army Air Corps in 1943, and was stationed in China for the duration of WWII. After his discharge from the Army in 1946, Vern attended Kansas University where he completed his Master's degree in mathematics. Vern met the love of his life, Valdah ("Vicki") Harkness, while at Kansas University. They married in 1947, and moved to Hollywood, California. Vern made a career of sales in the electronics industry, and received many awards for his achievements. They built a home in Manhattan Beach in 1956, raised their two children, Marlene and Karla there, and continued to live in that home until their deaths. Vern and Vicki were active social members of the Manhattan Beach Badminton Club during the 60's and 70's. Vern enjoyed the beach, body surfing, skiing in Park City, golfing with the Occasional Invitational golf group, Sunday afternoon horseshoes and working out at the gym. He traveled extensively cruising all over the world with Vicki and more recently with his daughter Marlene and son-in- law Michael. Vern spent much of his time playing and partying with Michael Aaker and family, John Holladay and family and Ellis Chane. Vern was preceded in death by his five siblings, his wife Vicki, and his daughter Karla. Vern is survived by his daughter Marlene O'Hara and her husband, Michael, of Park City, UT; his son-in-law Randy Lyman and wife Lori of Palos Verdes Estates, CA; his granddaughters Kari Scoggins and her husband Shane of Santa Ynez, CA; Tobi Miller and her husband Ben of Evans, GA; his grandsons Scott Ligare of San Diego, CA; Marshall Ligare and wife Samantha of Richland, WA; and Todd Ligare of Salt Lake City, UT. He will be forever loved and remembered by his family, friends, and extended family. A memorial service to celebrate Vern's life will be held at 2:00 p.m. on Saturday, October 10, 2015 at the Redondo Beach Center for Spiritual Living, 907 Knob Hill Ave, Redondo Beach, CA.