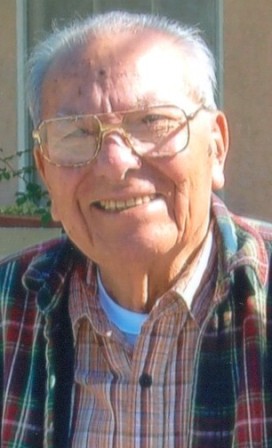 Tranquilino Cipres Jr. passed away on August 20, 2012. Born January 25, 1918, he was preceded in death by his parents Tranquilino and Rosario Cipres, (brothers) Richard, Henry, Manuel, Marcellino and (sister) Luz (Garcia). He is survived by his spouse of 64 years, Vicenta, his daughters; Priscilla (Dennis) Leighton, Vivian (Mike) Bruno, his sons; Robert (Kay) Cipres, Patrick (Rene) Cipres; granddaughters Genine, Tara, Rosanna and Samantha; Grandsons Daniel, Steven and Matthew; and great grandchildren Isabelle, Sydney and Gavin. He served as an Usher and Eucharistic Minister for over 50 years in the parishes of St Joseph's (Hawthorne) and later at St. Catherine Laboure (Torrance). As a Sgt. in the US Army during World War II, he served in the Pacific Theater along with four of his brothers' as one of the many "Bands of Brothers". All five (5) returned safely to their parents' home in Los Angeles at the conclusion of the war. He was a plastering contractor by profession and many commercial and residential properties in West Los Angeles (a number of which still stand) bear the mark of his master craftsmanship. Upon retirement, he and Vicenta traveled with the senior citizens groups of St Joseph's, St Catherine Laboure and the City of Lawndale. The rosary will be recited on Monday, August 27, 2012 at Rice Mortuary, Torrance, CA. A funeral mass will be celebrated on Tuesday, August 28, 2012, 10 a.m. at St Catherine Laboure in Torrance, CA followed by internment with full military honors at Riverside National Cemetery in Riverside, CA.