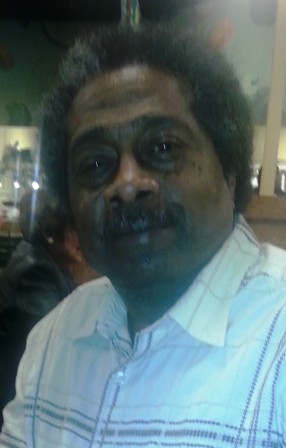 Celebration of Life for Tom Starling Tom Starling was born March 7, 1953 in Los Angeles, California to Louise and Frank Starling. He was the 5th child of eight children. Tom received his early education in Los Angeles and graduated from Jefferson High School in 1971. Shortly after graduation, Tom had his first child - Tom Starling Jr., followed by a daughter, Christie Lake. Then, in 1974, while driving down El Segundo Blvd in his blue 1972 Cadillac, he saw a set of long, beautiful track legs standing at the bus stop. Those legs belonged to a young lady that would later become his wife - Cecelia Sanders. Together, they raised 3 children - Patrice, Tom II, and Ashley. Tommy, as Cecelia affectionately called him, worked many jobs over the years; however, his passion was security. Tom loved people and took pride in ensuring their safety. His charismatic nature and great sense of humor made him well liked among his colleagues and superiors regardless of where he was stationed to work. When not at work, Tom enjoyed road trips, watching his favorite TV shows, movies, and attending card game parties with his sisters and brothers. He also loved dancing, especially the days of trying to keep up with his wife Cecelia cha cha dancing! After Cecelia’s untimely demise in 2008, Tom often spoke of his desire to one day dance with her again in glory. Over the course of the last few years, Tom suffered from a chronic lung disease that kept him in and out of skilled nursing facilities. He lost his valiant battle on March 13, 2018 at 2:19 pm. Tom is preceded in death by both of his parents - Louise and Frank Starling; sister - Emma Davis; grandson - Tyshawn Starling; and the love of his life and wife - Cecelia Sanders-Starling. He leaves to cherish his memory, his siblings: James Nash Sr. (Pat Nash), Frank Starling Jr.(Janice Starling), Joe Lee Starling, Kenneth Starling, Nornice Green, and Mary Starling; His Children: Tom Starling Jr., Christie Lake (Patrice Kyle), Patrice Sanders (Joe McClendon), Tom Starling II and Ashley Sanders; His Grandchildren: Shaunte, Vincent, Kaleb, Kyle, Paedyn, Iyannah and Isaiah; and Great grandchild: Kayla as well as a host of Nieces, nephews, cousins and friends.