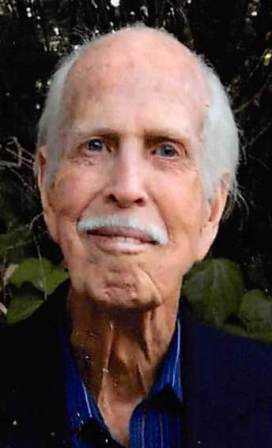 Thurmon Pershing "Pat" Cunningham was born in St. Louis, Missouri to William Jackson Cunningham and Virginia Thurmon Cunningham on July 24, 1918 and passed into Heaven's glory on January 8, 2017. He was the fourth boy and the fifth child of six siblings. In October of 1920, Pat's family came to Manhattan Beach, where he resided for a span of 96-years, except for attending Junior College in Taft, CA and his service to his country with the 82nd Airborne Division in the European Theater during WWII. Pat took great pride in being one of longest living residents of his beloved Manhattan Beach. While a teenager, Pat made one of the first long boards and became a skilled surfer. A fine athlete, he held several collegiate records in gymnastics. He began working at North American (Aviation) Rockwell in 1940, and continued there in management positions throughout the company's iterations, retiring after 40 years. It was there that he met his future wife, Florence Schwartz, and they were married on September 25, 1945, until her passing in 2008. In his retirement years, Pat was president and program chair of the retired Boeing management association, The Bald Eagles. He was a noted Dahlia hybridizer and President of the Bay Cities Dahlia Society, patenting new flowers that became commercially important. Pat was also the president of the Manhattan Beach Historical Society where he remained an active member. Pat is survived by his brother William Cunningham; his daughter and her husband, Sue and Randy Boldt; three married grandchildren and six great-grandchildren who love him to the moon and beyond and are grateful to the Lord Jesus for his life.