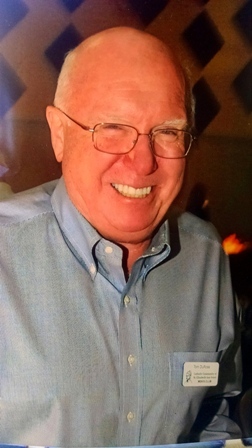 Thomas M. "Dewey" DuRoss was born on April 14, 1951 to Joe and Alice DuRoss in Los Angeles, California. He passed away suddenly on November 8, 2015 after a day spent with people he loved. He is preceded in death by his parents and his brother, Jim. He is survived by his beloved wife of 36 years, Kathryn M. "Kass" DuRoss; his four children, Annie (Kevin Babuder), Tommy (Nicole), Matthew, and Neil; his siblings Neil, Kathleen, Joe, Danny, and Paul; his grandchildren, Patrick and Claire; numerous nieces, nephews, and in-laws; and countless friends, all of whom will sorely miss his warmth and sense of humor. A native of Los Angeles (Loyola High '69, Loyola University '74), Tom spent the last 28 years making a home for his family in Plano, Texas. He was sustained in life by his strong Catholic faith and the love of his family. He was good at poker, and great at making friends. He never had a bad day. A viewing and rosary will be held on Thursday, November 12 at St. James Catholic Church in Redondo Beach at 7:00 p.m. The funeral will be at St. James on Friday at 10 a.m. In lieu of flowers, donations may be made in his name to the Jesuit Memorial Fund, c/o Jesuit College Preparatory School of Dallas.