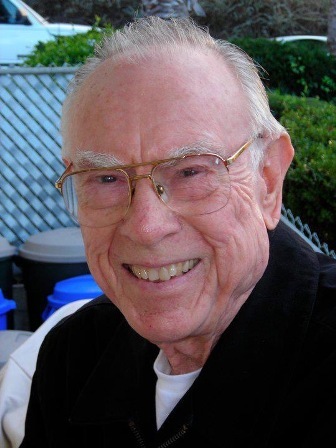 Thomas "Tom" Martin Strickfaden died peacefully on August 26, 2015 at the age of 93. He leaves behind his daughter, Shelley Rowell; and his son, Thomas Martin Strickfaden II. Tom, a long time resident of Palos Verdes Estates, California was born on September 11, 1921 in Lewiston, ID, to father Lee A. Strickfaden and mother Helen Strickfaden. Tom graduated from Loyola High School and attended UCLA where he studied business administration. In World War II he served in the United States Army infantry as a 2nd Lieutenant in the 78th Lightning Division. Tom returned to Southern California where he graduated from USC. He met and fell in love with Julia "Joy" Kilcoyne at a Valentine's Day party. After two years of serving during the Korean War, he married Joy on September 20, 1952. Tom created a successful insurance brokerage which he operated until 2013. He and his wife Joy adopted three children, Shelley, Thomas and Tracy, lived in Palos Verdes. Tom is survived by his children, Thomas and Shelley, and two nephews, John Farnan and Joe Farnan. He is preceded in death by his parents; his sister Marylee Farnan; his son Tracy in 2009; and his wife Joy in 2012. Visitation is schedule for 7pm, September 1 at Rice Mortuary; a Funeral Mass is scheduled for 10am, September 2 at St. Lawrence Martyr Catholic Church in Redondo Beach, and then internment at Holy Cross Cemetery in Culver City. All are welcome.