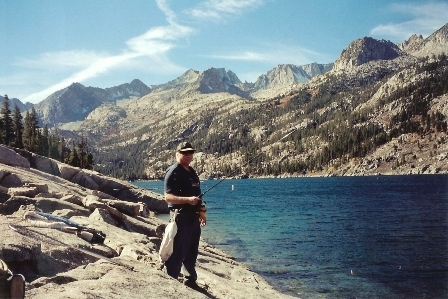 Thomas "Tom" Burge died at Kaiser Hospital on October, 8, 2014 in Harbor City, California, at the age of 79. Tom was born on June 24, 1935 in Los Angeles, CA to his parents, Bernard "Bud" and Irene Burge. He grew up in Venice, CA and graduated from Venice High School in 1954. During his high school years Tom worked for the Southern Pacific Railroad. From 1954 to early 1956 Tom worked for Pacific Electric Railroad as a signal man. He married Shirley Rixey on January 7, 1956 in Las Vegas, Nevada. On February 27, 1956 Tom began work as substation operator and dispatcher for Los Angeles Department of Water and Power. Tom also joined the Air Force Reserve on December 7, 1957 where he served for six years. For several years starting in 1961, Tom also served on the Torrance and Palos Verdes police reserve. He retired on March 6, 1986 from LADWP and spent much of his free time gardening, working with model trains, fishing in the Sierras, visiting live trains and building original electrical projects for his home. Tom was a kind man with a knack for home and electrical repairs. He enjoyed helping others fix their thought to be lost items including televisions, sprinklers and cars. He was often referred to as "Mr. Fix It." He also enjoyed helping and spending time with his family. He enjoyed family trips and visits from his children, grandchildren and great grandchildren. Tom also enjoyed dedicating much of his time to his pet cats. Anybody who knew Tom knew he loved his cats. Tom is survived by his wife Shirley; his three children Glen, Bryan and Cathy; his three grandchildren Wendy, Michael and Julia; and his three great grandchildren Autumn, Anthony "AJ" and Emily. He is also survived by his sister Mary; his nieces and nephews Roxanna, Billy, Danny, Sean, Anna and Sabrina; and his cousin Darlene. Tom will be buried at Pacific Crest Cemetery in Redondo Beach, CA on October 18, 2014 at 1:00pm with a viewing beginning at noon. Services to be followed by a private luncheon at Rice Mortuary in Torrance, CA beginning at 3:00pm.