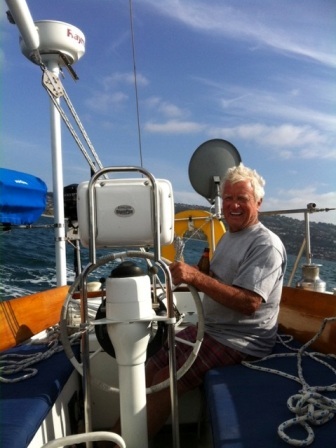 Thomas "Tommy" Brookes, a beloved and long-time resident of Hermosa Beach, California, passed away amongst his family and close friends at the age of 74 after a courageous battle against lymphoma. Born in Los Angeles, Tommy was the oldest son of Cyril and Adelle Brookes. From early childhood, he was always drawn to the sea. Tommy spent some of his early years living on Catalina Island until his family permanently moved to Hermosa Beach in the late 1940's. This was to have a profound impact on his life. As his father once stated, "It was all over once Tommy had sand between his toes." Tommy went on to become an avid surfer and was part of the "Double Deuce Danglers" of 22nd Street in Hermosa Beach along with local surfing legends such as Dewey Weber and Tim Kelly. In addition to surfing, Tommy was a gifted athlete – he excelled in Little League at Clark Stadium and became an all State CIF wrestler at Mira Costa High School. At this time, Richard "The Fox" Mobley gave him the nickname "The Baron" after a famous wrestler on television, a name his friends affectionately called him all his life. Tommy's love for the ocean led him to pursue both a bachelor's and master's degree in Marine Biology from California State University, Long Beach. He wrote his master's thesis titled "The Occurrence, Distribution and Diet of Some Marine Euphausiid Crustaceans in the North Pacific," and spent much of his time scuba diving and venturing to places like Marineland of the Pacific as part of his research. During his college years, Tommy also taught fifth grade elementary school in Los Angeles and worked summers as a casual longshoreman in Long Beach and as an electrician for the family business, Brookes Electric Company in Hermosa Beach. Tommy eventually became a full-time electrical contractor, started his own electrical business and became an expert in the field. In the 1980's, Tommy enjoyed playing tennis at the Manhattan Country Club and coached both AYSO soccer and Little League baseball at Premier Field in Manhattan Beach. Tommy also took up sailing, which became his passion for the rest of his life. He owned his own sailboat "Adelle" and participated in races off both the west and east coasts of the country. Tommy sailed countless times to Catalina Island with family and friends and loved to spend time at the Portofino Marina in Redondo Beach where his sailboat was docked. Tommy loved traveling to other countries, cooking gourmet meals, celebrating holidays with family and sharing his exuberance for life with others. He had a great appreciation for movies, music and an enthusiasm for sharing stories. Tommy truly lived life to the fullest and always ensured that people in his presence were having a wonderful time. Tommy will be deeply missed most for his kind heart, beautiful smile, big laughter and extraordinary sense of humor. He was loved and respected by all and left the South Bay community a brighter and happier place. Tommy's legacy lives on through the countless lives that he touched and the numerous stories that people have of their wonderful experiences with him. Tommy is survived by his two younger brothers, George and Jim; his two daughters, Lara and Hannah; his son, Matthew; his grandson, Harrison; and his long-time girlfriend, Gloria. A Celebration of Life is scheduled for Friday, November 20, 2015 at 11:00 AM in front of the Tim Kelly Lifeguard Memorial Statue at the Hermosa Beach Pier. A paddle out and burial at sea is also planned for the following morning off the coast of 22nd Street in Hermosa Beach. All those who love Tommy and wish to pay tribute are welcome to attend these events.