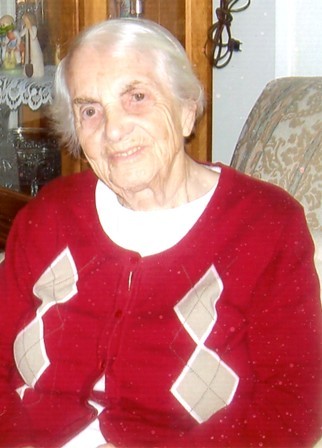 Theresia Kramer Hafner September 20, 1913 - July 27, 2014 Theresia Hafner was born in Szakadat, Hungary, the last of six children of Joseph and Elizabeth Kramer. She married Anton Hafner at the age of 16 and gave birth to her only child Theresia in 1931. After losing her husband in 1941 she survived WWII, only to be deported by the communists because of her German ancestry. She and her family were relocated to a refugee camp in Hammelburg, Germany. While in camp her daughter and husband John Reviczky had two children: Julius and Maria Reviczky. Thanks to Catholic War Relief Services, the family immigrated to the United States in 1952. Her third grandchild, Anita Reviczky, was born two years later. Theresia quickly found work as a seamstress, eventually working her way up to sample maker during her 20-year career. Her skills as a seamstress came in handy as she made clothes for all members of her family. In 1973 she moved from Gardena to Hermosa Beach. She retired at age of 63 to take care of her numerous great grandchildren: Timothy, Robert, Gretchen, Nicholas, Jeffrey, Emily and Aaron. She later cared for her great-great- grandchildren: Zachary, Casey, Logan, Julianna and, Charles. Theresia will be remembered for her love of gardening, babies, Las Vegas, Wheel of Fortune, The Price is Right, beauty pageants, professional wrestling and of course, knitting and sewing. Her family meant everything to her and she helped them in any way she could whether it was child care, making her famous soup or lending money to her grandchildren to purchase their first homes. She was always funny without knowing it while speaking "Germlish", a unique combination of German and English that people who spoke either language could seldom understand. She had an unforgettable personality and loved to tell her story to anyone who would listen. All who knew and loved her will miss her, but she will never be forgotten. Theresia is survived by her three grandchildren, six great- grandchildren, and five great- great grandchildren. She was predeceased by her husband, her daughter Theresia Thompson and her son-in-law Lawrence Thompson. Funeral Mass at American Martyrs Church at 11 am Monday, August 18. Rosary at 7 pm Sunday August 17 at White and Day Mortuary, Manhattan Beach.