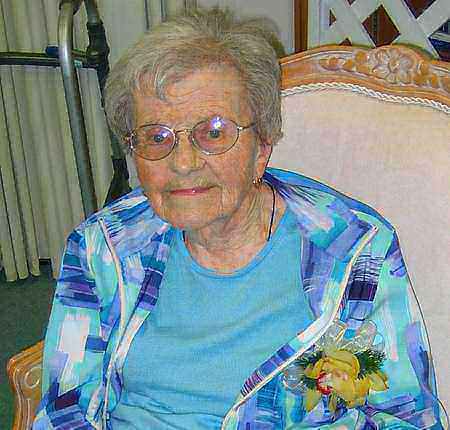 Swanson, Sylvia Laree, a 72 year resident of the South Bay, passed away on Thursday, December 20, 2012 in Rancho Palos Verdes. Born in Aurora, Nebraska, Sylvia was 90 when she died. She was a member of Rolling Hills United Methodist Church and P.E.O. She received her Associate's Degree from Santa Monica City College. Sylvia worked as a Bookkeeper for an accounting firm, served on her church Finance Committee, and was Treasurer for the church pre-school for decades. Spending time with her grandchildren and her church life were her greatest pleasures. She loved attending USC games with her family. Sylvia had special relationships with her P.E.O. sisters, long-time neighbors Pauline and Rollin Sturgeon and Jeananne and Tom Morris. Special thanks to her minister, Pastor Jonathan Chute; her close friends Kim and Jim Hall and Doug Kemps; and her loving caregivers Ingrid, Eme, and Linda. Sylvia is survived by her daughter, Beverly (Alvro) Hubbard of Chico, CA; son, Brian (Bernadette) Swanson of Davis, CA; and grandchildren: Sara Hubbard, Erik Swanson (Monica Richmond), Adam Swanson (Stephanie Byrd), and China Swanson. Sylvia was preceded in death by her parents, Edward and Effie Lewis; her brothers Russel (Winifred) Lewis and Irvin (Ruth) Lewis; and her husband Archie Gerald Swanson. A gathering of family & friends will be held at White & Day Colonial Mortuary in Redondo Beach on Thursday December 27, 2012 from 5 to 9pm. Burial will be private at Inglewood Park Cemetery. The Memorial Service will be held on Saturday December 29, 2012 at Rolling Hills United Methodist Church at 2pm, In lieu of flowers, donations may be made to the Rolling Hills United Methodist Church Pre-School.