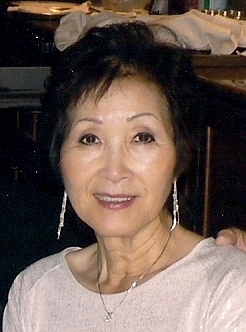 Sumiko "Sue" Maeda was born on September 5th, 1932 in Otaru, Japan as the youngest of six siblings to Chuzaburo and Hatsui Tanpo. Her father was a successful merchant in this seaside port city on the Island of Hokkaido, who would pass down the family business to Sumiko's oldest brother Kenji. After Chuzaburo's passing Sumiko's mother Hatsui took over as matriarch of the Tanpo family. Sumiko attended Aoyama University in Tokyo to study English Literature since her father wanted her to become a teacher. After college, at a USO event, Sumiko met a young US serviceman, who she married and moved to Los Angeles, California with. Eventually Sue and her husband moved to North Hollywood where she was active at the Japanese American Community Center in San Fernando and made many lifelong friends. Other activities she participated in were Hula dancing, painting, Mahjong, and starting a lifetime hobby of crochet. While living in North Hollywood Sue and her husband had two children, Sharon and Craig Telljohn, who were raised to appreciate their Japanese heritage. Sue worked as a movie and television extra on and off for twenty years. Her credits include: Mork and Mindy, MASH and Chicago Hope (multiple episodes), Blues Brothers, Outbreak, and Bullworth http://www.imdb.com/name/nm0854508/. In addition to a career in Hollywood Sue worked on the Space Shuttle program at Rocketdyne for many years in the purchasing department. As a new bachelorette, Sue took on two new hobbies, ballroom dancing and golf. At a golf event she met her future husband William "Bill" Maeda and convinced him to start ballroom dancing. After their marriage on Christmas of 2000, they continued golfing here in Southern California, going on golf vacations around the world, cruising in Hawaii, Alaska, Europe, Asia, and South America, and playing the hands and foot card game. Additionally she enjoyed doting on her grandkids and taking the title of Grandma Sue. Sue was such caring and humble person that she kept the knowledge of her five year battle with liver cancer from her friends since she did not want them to worry. Sumiko was fortunate to pass in the love and care of her immediate family. She is survived by her loving husband William Maeda, daughter Sharon Telljohn of Atlanta, GA, son and daughter-in-law Craig and Martina Telljohn of Torrance, CA, stepdaughter Stephanie and her husband Gerald Choi of Oahu, HI, grandsons from Sharon, Dylan and Daniel Kenji, also her middle sister Takako from Japan, and her nieces, nephews, and cousins from Japan.