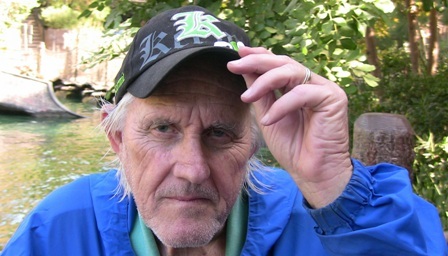 North Torrance High School Special Education Teacher and Coach Stewart C. Kemplin Dies Quietly at Local Hospital      Funeral Service for Stewart Clayton Kemplin, 83, will be on Tuesday June 23, 2015 at 2:30 P.M. at Green Hills Memorial Park, 27501 South Western Avenue Rancho Palos Verdes, California 90275. Pastor Dave Matson officiating.      The body will lie in state on Monday evening June 22, 2015 from 5 to 9 P.M. at Rice Mortuary 5310 Torrance Blvd., Torrance, CA. 90503. Mr. Kemplin died quietly Friday morning June 5, 2015 at Harbor UCLA Hospital with his sons at his side.      Mr. Kemplin's first job as a young Iowan was as a paperboy for the state newspaper, the Des Moines Register.      Mr. Kemplin graduated from Abraham Lincoln High School in 1950. After graduation he went to work for Swanson foods in Council Bluffs.      Mr. Kemplin in 1952 enlisted in United States Navy and served during the Korean War as a Plane Captain with VF-121 Squadron on the U.S.S. Boxer CVA-21 with the rank of a 3rd Class Petty Officer.      After the war he stayed in California and went to work for Roar Aircraft. However, he soon quit to pursue a dream. He went back to school on the G.I. bill to become a teacher.      Mr. Kemplin attended San Bernardino Valley Community College and graduated in June 1955. Next Mr. Kemplin would attend and earn a BS degree from the University of Redlands in California, becoming the first in his family to graduate college. He reached this goal in 1959.      He was hired as a Special Education teacher and Coach by the Torrance Unified School District in 1961 and would be a teacher at North Torrance High School in Torrance California for the next 35 years, retiring in 1996.      Mr. Kemplin coached many sports while at NHS including the 1965 Sky league wrestling championship team, that this year is celebrating the 50 anniversary of this championship.      Mr. Kemplin in his retirement would enjoy the next 19 years always on the move with his family and friends at the movies, sporting events, book signings, concerts and spending a lot of time at Disneyland.      Mr. Kemplin was born on December 10, 1931 in Council Bluffs Iowa to Mr. William Warren Kemplin and Wilhemina Helena Steinmeier (Kemplin) the third son of a family of four children.      Mr. Kemplin was married to Marilyn Jean Williamson (Kemplin) of San Bernardino California on December 29, 1955.      Mr. Kemplin also was a man of faith and was a member of the South Bay Church of God inTorrance and a member of the Crystal Cathedral in Garden Grove.      Mr. and Mrs. Kemplin enjoyed life, together for 58 years, while they raised two sons and lived in North Torrance for 53 years until her death last June 28, 2014. He was preceded in death by his parents and two brothers. His middle brother Pfc. Alvin Gerald Kemplin was killed on the Island of OkinawaJapan on April 23, 1945 just 4 months before the end of World War II. Alvin was his inspiration for Mr.Kemplin joining the U.S. Navy.      Mr. Kemplin's eldest brother Warren Eugene Kemplin Sr. who gave him his love for movies passed away in 2002 at 85 years old.      Survivors include his 94 year old sister Doreen Lees of Loma Linda, California, and his two sons, Craig Kemplin and Blaine Kemplin of North Torrance, California.