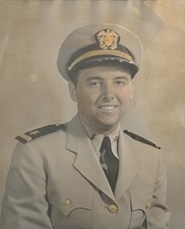 Stephen Campbell, 97, passed away of natural causes on October 12, 2016, in Los Angeles, California. Steve exemplified the Greatest Generation, coming of age in the Depression, serving in World War II, enjoying a long and fruitful marriage, raising eight loving children, serving with various charities and having a successful career. His lived his life as a testament to the importance of three things: his family, his Catholic faith and his country. Steve was born in Louisville, Kentucky on July 19, 1919, the fourth child to Morton Reck Campbell and Lillian Wood Campbell (of Tennessee). He had an identical twin brother, John Owen, an older brother Morton Reck, Jr. and a sister, Catherine Wood. The family soon moved to Atlanta, Georgia, where Steve grew up and spent his boyhood years. He attended Sacred Heart Elementary School, Marist School, and Boys High School. As a college student he served in the Georgia State cavalry corps. (He had a special love for horses and dogs!) His favorite sport was golf—he could shoot par—and in his later years he would regale his children with stories of watching the legendary Bobby Jones play at Atlanta's East Lake golf course. Steve graduated from the Georgia Institute of Technology in 1941, with a degree in electrical engineering. He attended the Massachusetts Institute of Technology, studying a new "object detection system," called radar. When World War II broke out, although he could have obtained a deferment due to his radar studies, he instead joined the Navy, serving in the Pacific as a radar officer on board the U.S.S. Chandeleur for the entirety of the war. After the war, Steve relocated from his beloved Atlanta to Southern California, working in its burgeoning aerospace industry. In 1952, Steve met his soon-to-be wife, Ann Marie Luis, and they were married for 64 years. They had eight children, were active parishoners of their church and supported many charitable organizations. He worked for 35 years as an engineer for Hughes Aircraft Company, being a chief engineer on the pioneering Phoenix missile. But he still always found time to help at his children's school, fixing anything mechanical or electrical which had broken, traveling to Tijuana to help at a shelter for the poor, traipsing with the kids to the beach on summer Sundays, and telling bedtime stories about growing up in Atlanta. While he was a mathematician, Steve had an artistic side, as well. His hobby was woodworking, mostly carving and constructing clocks. Each of his children cherish a clock, and other items, lovingly designed and made by Steve. His children have memories of him coming in from his garage workshop covered with a fine layer of sawdust from hours spent carefully sanding and oiling a piece of wood "to get just the right sheen." Through his clock-making, Steve was able to combine two things he admired: the beauty of wood and the beauty of mechanics. He devotedly carved and crafted icons and crosses, which to this day adorn his parish church. Steve is survived by his wife, Ann, and his children, Stephen, Jr., John (Lynn), Ann, Elizabeth (Louis), Catherine (David), Michael (Gina) and Christopher (Sandy). He'll also be missed by his 22 grandchildren, and 15 great grandchildren. He is pre-deceased by his son, David; his twin brother, John; his brother Morton (of New Orleans, LA); and, his sister Catherine Hearst (of Beverly Hills, CA). For funeral information, contact Rice Mortuary. He will be interred with military honors, alongside his parents and his sister Catherine, at Holy Cross Cemetery, Culver City, CA.