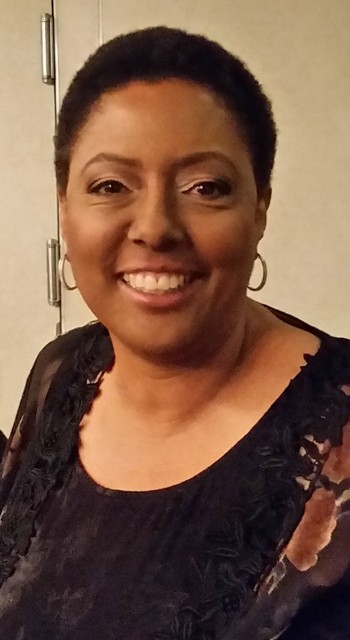 Stephanie Yvette Muldrow was born February 18, 1962 in Fulton, Arkansas. She was the only child of James K. and Eddie Merl Muldrow. James preceded Stephanie in death. At a young age, Stephanie moved with her family to Arizona and then to California. Stephanie attended Perry Elementary School in Gardena, Harbor City Christian School and graduated from Bishop Montgomery Catholic School in Torrance, California. At Harbor, Stephanie was active in choir, cheerleading and sports. It was also at Harbor that, at the age of 13, she gave her life to Christ. At Bishop, she expanded her creative skills of crocheting and knitting. Anything that had to do with needles and yarn, Stephanie excelled. She shared her skills by making baby blankets for everyone she knew. She was an active member/officer in the high school chapter of the National Sorority of Phi Delta Kappa-Beta Phi Chapter, Xinos. Through this sorority, she was a debutante. Stephanie graduated from the University of California at San Diego with a Bachelor of Arts degree in Psychology. She was an active student, establishing many friendships, serving as an officer in the Black Students’ Union, singing in the UCSD Gospel Choir and generally involving herself in a myriad of opportunities for learning and growth. She went on to achieve a Master’s Degree in Counseling from San Diego State University. Stephanie was an excellent student throughout her grade school and college days. As a child, Stephanie often attended worship services at the Imperial Church of Christ with her Aunt Minnie. In October of 1980, Stephanie was baptized at the 38th Street Church of Christ in San Diego. She was a “Bible scholar”, faithful in church attendance and extremely active in church programs. She taught Bible classes, published church bulletins, orchestrated Vacation Bible School, attended Bible lectureships, seminars and workshops, and facilitated and spoke at many gatherings of Christians. Stephanie exemplified the spirit of Christ by showering her gifts of love everywhere she went. Whether by words of encouragement, kind notes, thoughtful gifts or even silent prayers and support, the world knew that Stephanie followed Jesus and his teachings by the love she showed toward everyone. Stephanie worked as an Academic Counselor for 28 years until she retired. According to former provost Allan Havis, “Stephanie championed the rich diversity at Third College/Marshall College in countless ways impacting thousands of students’ lives. She was a profound leader and ambassador for UJIMA, Black Staff Association, Summer Bridge, OASIS, exchange program with Spelman/Morehouse Colleges in Atlanta, Preuss/Gompers Charter Schools, TMC 10 (Methods of Inquiry with Dr. Willie Brown), the African American Studies Minor when it was launched and housed at TMC, and myriad scholarship programs for minority students. Stephanie shaped TMC Orientation for a long span of years and inspired generation of TMC OLs. Even after Stephanie’s retirement, she returned to Marshall to serve as Interim Dean of Student Affairs in 2016. She embodied the very best of our college’s ethics, ethos, humility and greatness. Being a dear friend and a colleague to Stephanie meant a robust relationship for life.” Stephanie enjoyed reading, writing, knitting, crocheting, traveling, fishing and planning events. She continued doing these things she loved, even as she became a dedicated, round the clock caregiver for her mother in retirement. Once when she was a Keynote Speaker at a Ladies Day event, she listed the following scriptures as some that helped her in her daily walk with Christ: Proverbs 3:5-6, Luke 12:41-48, Hebrews 4:16, Hebrews 5:8, Galatians 6:9-10, Philippians 2:5-13, Philippians 4:4-9, Genesis 50:20, Psalm 139:14, and Psalm 19:14. Stephanie forged life-long friendships everywhere she went. The outpouring of love that has been expressed by hundreds of people telling how Stephanie helped them is a testament to her love for humanity. Those left to cherish her memory include: Her loving mother, Eddie Merl Muldrow of Gardena, California, Aunts Mae E. White of San Diego, California, Lola & Mary Morrison of Fulton, Arkansas, Marjorie Muldrow of Compton, CA, Velma Harris of Oakland, CA; Uncles Samuel Muldrow of Phoenix, Arizona and I.V Hamilton of Madison, Alabama; generations of cousins and her Ruthelen Street family and many lifelong friends.