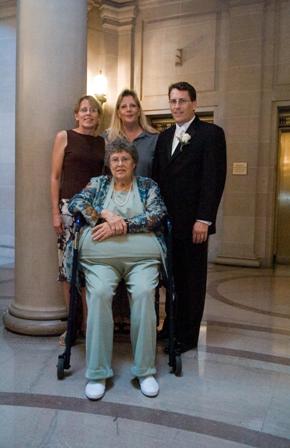 Shirley Ann Laursen was called home on March 2, 2012, in Spokane, Washington. Shirley was born December 21, 1929, in Scottsbluff, Nebraska. Shirley was a rancher's daughter and true pioneer woman. She received her education in 1-room prairie schoolhouses and proudly graduated from Scottsbluff High School, in Scottsbluff, Ne in 1948. On January 6, 1952, she married her husband, Vernon B. Laursen. They lived near Alliance and worked the family farm where they had two daughters, Janet (Bill) Phillip of Cheney, WA, and Cynthia (Paul) Chafe of Redondo Beach, Ca. In 1957 the family moved to California looking for a better life, where they proudly welcomed a son, Mike (Frances) Laursen of Mountain View, Ca., and made their family home in Redondo Beach. She had to say a sorrowful good bye to her husband in 1988. Shirley was the oldest of four daughters of Robert and Hazel Hood. She is survived by her sisters, Barbara Henderson of Alliance, Ne, Roberta Laursen of Lakewood, Co and Margie (George) Boardman of Reedley, Ca. She was the very proud and caring grandmother of 7 grandchildren; Karla (Toshi) Sugitani, Tom Phillip, Chris (Ellen) Chafe, Doug Chafe, Mark Chafe, Nate Laursen and Clara Laursen. She was blessed to have 1 great granddaughter, Mae Sugitani. Shirley was also the loving aunt to 43 nieces and nephews and a very large caring family of cousins. She will be missed by all who knew her including her numerous honorary grandchildren, friends and wonderful neighbors that she gathered to her over the years. She loved being known as Grandma to everyone she knew. Shirley worked for 23 years at Redondo Union High School serving lunch to "all her kids". She was a founding and faithful member of Trinity Lutheran Church, Manhattan Beach for over 55 years. At Trinity she was honored to be part of the Alter Guild for over 30 years. She was also very proud of her membership in Trinity's Keen-Ager group. A viewing is scheduled for Thursday, March 8 from 5-9 pm at White and Day Colonial Mortuary, 901 Torrance Blvd, Redondo Beach. Services will be held on Friday, March 9 at 11:00 a.m. Trinity Lutheran Church, 1340 11th Street, Manhattan Beach, CA. Internment will immediately follow the service at Pacific Crest Cemetery, 2701 182nd Street, Redondo Beach, CA. A reception will follow at the church. In lieu of flowers, the family suggests memorials may be made to Trinity Lutheran Church, Attn: Keen-Agers or Knight Museum, Museum Partners, 708 Mississippi Ave, Alliance, Ne, 69301.