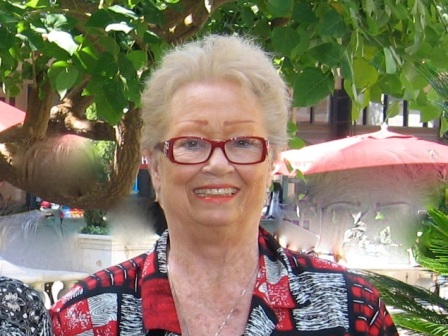 Sharon Marianne Accardo, a 49 year resident of Torrance, passed away on Sunday, April 28, 2013 at the age of 73. Sharon was born and raised in Chicago, IL, moving to southern California as a teenager with her mother Freda Crowe and sister Gloria. She attended Morningside High School in Inglewood. On February 13, 1960 she and Salvadore Accardo were married. Sharon will be remembered as a loving mother, grandmother, sister, and friend. She was happiest planning for the holidays, entertaining and visiting, always ready to tell stories, talk, and laugh. She loved her many arts and crafts projects, especially crocheting. She enjoyed being a member of the Redondo Beach Senior Center at Perry Park. For over 30 years she shared fun, laughter, and good times with her neighborhood Bingo Club. Sharon is survived by her devoted husband Sal; four children: Terri Ryan Newill (Bill), Cathie Urbina (Joe), Michael Accardo (Andrea), and Tony Accardo; eight grandchildren: Ryan Newill, Daniel, Nicole, and Natalie Urbina, Andrew, Amanda, and Kyla Accardo, and Dessica Accardo; her sister Gloria Freese; nephews and nieces: Steven Freese, the Hill Family – Lorie, Ted, April, Cody, Tyler, and Mason, and the Zingales Family – Johnny, Debbie, Shania, and Vincent; and her beloved dog, Gina. A gathering of family and friends will be held at Rice Mortuary in Torrance on Wednesday, May 8, 2013 at 11AM with a luncheon reception following until 2:00pm.