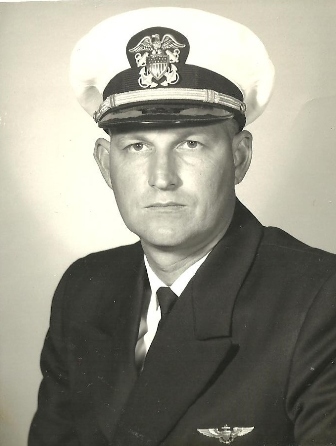 Seaborn Howard Wade Jr. December 21, 1930 – October 8, 2015 Seaborn Howard Wade Jr., 84, beloved husband, brother, father, grandfather died on October 8, 2015 in San Pedro, California due to complications from Cancer. Mr. Wade was born December 21, 1930 in Miami, Florida to his parents Seaborn and Clara Wade. After graduating from the U.S. Naval Academy, he served in the United States Navy for a total of 17 years and achieved the rank of Lieutenant Commander. He served in the Vietnam War as a naval aviator and received an Air Medal, Vietnam Service Medal, Armed Forces Expeditionary Medal and Meritorious Unit Commendation. After leaving the Navy, he worked for Pratt Whitney and led a team of engineers developing the Saturn 5 second stage nozzles. In addition, he worked as an Executive at Sigma Golf and Juvenile Shoe Company. He was also a PGA Pro and lead pilot. With his wife, he founded Seaborn Canvas a family owned and operated business that creates golf, marine and US flags in San Pedro, California. He loved reading, music, war novels and films and watching golf tournaments. His favorite meal was pecan praline ice cream and lobster. He also enjoyed sailing his Jeanneau sail boat. Mr. Wade is survived by his wife, children, grandchildren and great grandchildren. Following his memorial service at Rice Mortuary on October 14, 2015 at 9:00 am in Torrance California, he will be laid to rest in Riverside National Cemetery. "You are the wind beneath my wings"