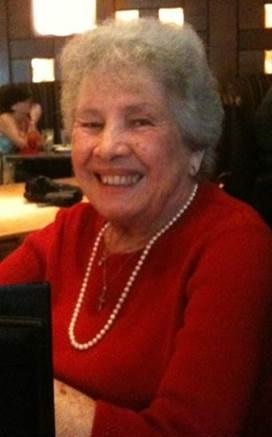 Rose Marie Palazzo was born in Los Angeles on September 10, 1923 to Sam and Rosele Barone. She lived the early years of her life in the City of Angels, ultimately settling in Torrance in 1963. She moved to Ventura in 2011 to be closer to her daughter Giselle as she entered an assisted living facility following a fall in her home. She married her beloved husband Joe in 1946 and three children; Michael, Analee and Giselle soon followed, completing the family. Once the kids were a bit older, Rose started a long career at Sears, working in the jewelry department for more than thirty years. She enjoyed her time at Sears, making lots of friends in the retail business. Things she loved doing included summer trips to Lake Tahoe with the family, any and all gatherings with family and friends (always involving great food!), Friday Mass and coffee at St. James, Las Vegas getaways, a multitude of card games, listening to Frank Sinatra, and any and all activities with Joe! In 1999 Joe passed away and her life was never quite the same. Rose was part of a very special group of close family members, commonly known as the Mocca Zizi Club. The group gathered monthly for dinner and card games, continuing for several decades. Rose was the last surviving member of the club and there is, without any doubt, one very large party taking place in heaven with all the members together once again! As her children started families of their own, Rose came to realize the joys of being a grandmother, and eventually a great grandmother. Her grandkids are Shannon, Allison, Anthony, Cristina, Jessica, Michael and Alyssa. Her great grandchildren are Dominic, Bella, Grant and Logan. There was also a deeply spiritual side to Rose. For nearly sixty years she said a rosary every night when she went to bed. A very special relationship formed between Rose and our Blessed Mother. She turned to Mary in time of need and the rosary was clearly her prayer of choice. But most of all Rose loved her family. Her husband and family meant everything to her. And now she's in heaven with Joe and daughter Analee; no doubt enjoying some great Italian food and maybe a glass of white zinfandel. Rose passed away in Ventura after a short illness on August 9, 2018 at the age of 94. She is survived by son Michael (Cheryl); daughter Giselle (David); brother Gene Barone; sister-in-law Rose Barone (brother Anthony-deceased), grandchildren and great children; and numerous nieces, nephews and cousins. She was predeceased by her husband, parents, brothers and daughter Analee.