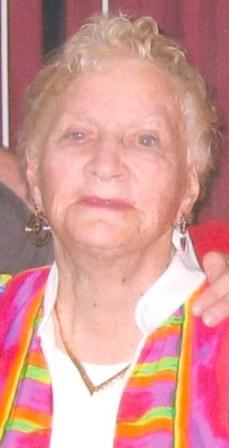 Rose Gertrude Coad Harris 96, passed away on March 23, 2013 in Torrance. Born December 5, 1916 in Omaha, Nebraska. Her parents, Richard and Irene McConnell Coad moved to Seattle, then Pasadena with their very lucrative car dealerships, which were lost in the Great Depression. Consequently she knew a life with wealth and a life with modest means. Rose Gertrude (R.G.) was the eldest of six children, Elizabeth Ann, Mary Irene and Richard Coad preceded her death and she is survived by two, Marcella of Grants Pass, Oregon and John Coad, of Northern Ca. R.G. is also survived by all six of her sons Andy (Michele), Raleigh (Mary) Ridgely (Carolyn), Matthew (Barbara), Marty (Windy), Rory (Sherry). R.G. is also survived by 16 grandchildren and 19 great grandchildren. In her early 20s R.G. got a job in Trona, California. It was there she met and married Martell Harris in 1940. Trona is where their first two sons Andy and Raleigh were born. The family then moved to Manhattan Beach then Redondo Beach, where Ridgely was born. The family of Five then moved to San Francisco then San Bruno California. Martell now working for Great Lakes Carbon Corp. was sent back East to Springfield, Pennsylvania where the twins Matthew and Martell Jr. were born. In 1950 the family relocated to Hermosa Beach then back to Manhattan Beach California were their sixth son Rory was born. In 1954 the family moved to Camino De Las Colinas, in the Hollywood Rivera section of Torrance, the house of many friendships and memories. All of these moves provided R.G., a stay-at-home mom with a semi-professional career of buying and selling homes. She did this always at a modest profit. The "Colinas" house was a large house built in the 1920s and required a lot of upkeep, all provided by Martell and their six sons. R.G. threw many lavish parties, including a couple of Kennedy fundraisers in 1960, much to the chagrin of Martell, a staunch Republican. Martell died in 1964, so in 1967 R.G. and her three youngest sons moved to a smaller house closer to South High School. When she sold that house she moved to Crestline, California where she officially became a real estate agent. In the early 1970s R.G. moved to Chico, California here she continued her real estate career. In Chico R.G. met and married Mike Sullivan, a decorated World War II veteran. In 1989, sometime after Mike Sullivan died, R.G. moved to Palm Desert, California. R.G. loved her home in the desert and her many new friends for the next 20 years, until her stroke in 2009. R.G. had a great life. She did pretty much what she wanted and she, like Frank Sinatra, did it her way for almost all her life. Her last three years, while not the best by her standards, were spent in assisted living in Torrance. She was very fortunate to have family close by to help and visit her daily. There will be a service to celebrate the life of R.G. April 13 from 2pm to 5pm at Rice Mortuary 5310 Torrance Blvd. in Torrance. The family requests in lieu of flowers donate to your favorite charity in R.G.'s name.