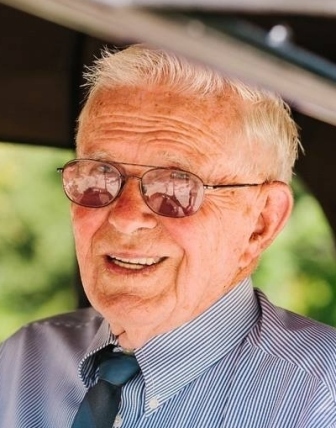 Roland (Duke) Ellingson, 90, of Torrance, CA, passed away Thursday, December 29, 2016 of natural causes. He went peacefully at home with most of his children by his side. Per his wishes, he remained at his home of 63 years. He was the remaining original homeowner on his block. Roland was born on Jan. 28, 1926, in Crandon, SD. He was the second of five children born to Otto and Emily Ellingson. He spent the early years of his life living in South Dakota, Washington, and Montana. He had many adventures visiting his cousins in South Dakota during the summer months. One was going waterfowl hunting. He and his cousins took off all their clothes, submerged themselves in the pond with their rifles held out of the water. Once the birds flew overhead, they rose from the pond and shot them, thus bringing home dinner. He also told of driving the tractor on a relative's farm in the heat of harvest time. He fell asleep at the wheel and drove willy-nilly across the crops with everyone wondering what he was doing. Roland always said he was most proud of having a family, and being in the Navy. He signed up for the Navy when he was 17 years old during WWII. Once he turned 18, his dad took him to the train station bound for boot camp at Farragut, ID. There he was incorrectly diagnosed with Scarlett fever and spent many weeks in the infirmary. He didn't mind as he got all the meals he wanted there. He spent most of his military service in the Philippines and Shanghai, China. He was a motor machinist mate on a Landing Craft Infantry vessel that only held about 20 men. He was proud of his service, especially delivering Chinese troops to Taiwan, formerly Formosa. He returned to Billings, MT, after the war to finish high school. As is the case with most WWII veterans, he didn't talk much about his service until late in life, only the funny stories. Upon arrival back in the States after the war, his small vessel was directed to fish harbor in San Pedro instead of Long Beach, without all the fanfare the vets deserved. His family tried to make up for this by having him recognized as one of Torrance's Hometown Heroes in 2014. His banner was proudly hung outside city hall. Roland was a sheet metal mechanic at Western Airlines for 34 years, retiring from Delta after the merger in 1987. He and his family were able to take many adventures with the flight benefits from his employment there. Many of the trips were back to Billings to spend summers with numerous cousins and family members, as he did when he was growing up. He instilled a sense of travel in all of his family. Roland married Mary (Lambrecht) in Billings, MT, on June 12, 1948. Together they had six children. He was pre-deceased by his parents, Otto and Emily Ellingson, two brothers; Wayne and Harold Ellingson, and his sister; Jeanne Reed. Also two of his grandsons; Travis and Tyler Ellingson. He is survived by his brother Donald of Sheridan, WY; his children; Chuck Ellingson of Lawndale, CA, James (Georgia) Ellingson of Torrance, CA, Susan Hansen of Longmont, Co, Roberta (Alan) Sonnenberg of Longmont, CO, Judith (James) Schmidt of San Luis Obispo, CA, and Tamara (Curtis) Mills of Phoenix, AZ; seven grandchildren and three step-grandchildren; and twelve great grandchildren. Services will be held at Rice Mortuary, 5310 Torrance Blvd, Torrance, at 11am on Sunday, January 8th, with viewing beginning at 10am. The family invites you to join them at a reception to follow at the same location.