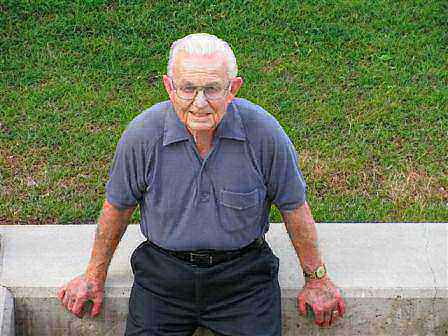 Roger Clifford Herron Roger C. Herron was born on March 3, 1933 to Harold and Lucille (Hahn) Herron in Huntington Beach, California. He was the first of five children. He loved his family and especially enjoyed vacationing with them. Roger was baptized on March 26, 1933 by Reverend Hugo Gehring at Redeemer Lutheran Church in Southgate, California. He was confirmed on March 30, 1947 at Good Shepherd Lutheran Church in Inglewood, California. His confirmation verse was "Be content with such things as we have; for He hath said, I will never leave thee, nor forsake thee." Hebrews 13:5. Numbers and organization were Roger's passion, and so he attended El Camino Jr. College where he received his AA Degree in Accounting. He then went to work for Arden Farms in their Accounting Dept. On May 29, 1954, Roger was joined in marriage to Esther Schuricht of Inglewood at Good Shepherd Lutheran Church. To this union were born five children: Sandra Bolen (Tony) of La Junta, Colorado; Dianne Mahmoudi (Behrouz) of Hawthorne, California; Roger (Trudy) of Reno, Nevada; Henry (deceased); and Mark of Torrance, California. Roger was grandfather to thirteen grandchildren and great-grandfather to six great-grandchildren. Roger and Esther moved to Torrance, California in 1959. Roger provided a wonderful home in a wonderful neighborhood for his wife and for his children in which to grow up. He worked six days a week and on Sunday drove his family to Inglewood to attend Sunday School and Church where his parents also attended. Afterwards, the family would head to Grandpa and Grandma's for a BBQ in the backyard. Roger worked for Arden Farms / Arden-Mayfair / and finally Santee Daries for 44 years. He retired in March of 1998. During his 15 years of retirement, he enjoyed painting his house, working on his yard, and stamp collecting. He served as an Elder at his church, Immanuel Lutheran in Redondo Beach, for 14 years. Roger always dreamed of taking a train trip, so for Roger and Esther's 50th Wedding Annversary, the children sent them on the Southwest Chief to Iowa, on the California Zephyr to Reno, Nevada and then on the Coast Starlight back home along the Califonia coast. Roger and Esther were blessed with almost 59 years of marriage. Roger is survived by his wife, Esther and children: Sandra, Dianne, Roger and Mark. And by his siblings: Shirley Belon (Albert) of Fairbanks, Alaska; Audrey Zacharias of Chatsworth, California; Howard (Judy) of Redondo Beach, California; and Lois Neely (Bob) of Ridgecrest, California. He was preceded in death by his parents and his son, Henry. Roger passed away May 3, 2013 in Torrance, California. He was loved by all who knew him. He will be missed very much. Yet, we know he is enjoying his reunion with his parents and his son, Henry – and being in the arms of Jesus.