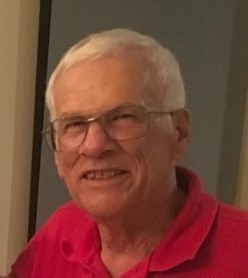 Robin Mackay March 27, 1931 - April 6, 2017 Robin Mackay died on Thursday, April 6, 2017 in Los Angeles, California at the age of 86. Husband, father, grandfather, great-grandfather, and friend to many, Robin lived his life fully and well. He was born on March 27, 1931 in Montreal, Canada to Agret and Florence Mackay. He lived in Montreal until he graduated from McGill University with a bachelor's degree in math and economics, in 1951. He married the love of his life, Valerie Wilde, at the McGill Chapel in 1954, almost 63 years ago. Robin and Val moved to the United States in 1956 with two small girls, Heather and Wendy, when he got a job at Boeing in Seattle. Their son Trevor arrived four years later. Robin was proud to become a United States citizen in 1964 and spent 24 years in various positions at Garrett AirResearch (now Honeywell), including Director of Industrial Market Development. Robin was a prolific inventor who developed new concepts, applications and markets for advanced gas turbines including the first all gas turbine cogeneration system and the first microturbine. He was a respected member of the SAE, the Society of Automotive Engineers International, and presented numerous papers at the SAE, ASME, AEE and other technical organizations. He had eleven patents and two pending. In 1988, he and his partner Jim Noe co-founded what became Capstone Turbine Corporation, the world's leading producer of low-emission microturbine systems. These light, small and quick-starting turbines provide 'instant-on' backup power and are used around the world, including successfully powering much of Catalina Island and the Reagan Library. Currently there are many thousand of these generators in use around the world, with almost zero maintenance. In 2004, Robin founded Agile Turbine Technology, LLC to continue his development of advanced gas turbines. Robin was an enthusiast: he not only loved gas turbines but was a true gadget connoisseur. He loved performance cars, dating back to his rally competition days at McGill in Montreal to his favorite new toy, his beloved red Tesla. Robin also loved boats, from his summers sailing at Lac Tremblant in Algonquin Park, Canada to his years of sailing and power boating in California. Robin was well known in the Southern California boating community, where he served as Commodore of the Redondo Beach Power Squadron, and Fleet Captain of the King Harbor Yacht Club. He and Val cruised the coast of California and the mediterranean with friends and family, including many happy memories at the Forth of July Yacht Club on Catalina Island. More recently, Robin and Val enjoyed cruising and travelling the world, in Asia, South America and Europe. After many years in Palos Verdes, he and Val moved to Manhattan Beach, where he loved his daily walks along the strand. An accomplished photographer, he loved taking pictures of his travels and especially the beautiful sunsets over the ocean. Robin was an avid skier all his life. He and Val invited family and friends to their house in Mammoth Lakes. He was delighted to receive his free Mammoth ski pass when he turned 80, and put it to good use. He was extremely healthy and fit and enjoyed skiing during this year's record snowfall. He was active in the local community in Mammoth, as a member of the Rotary Club. Every summer, he and Val hosted the Felici Trio, a world-class chamber music group, during the annual Mammoth chamber music festival. He loved classical music of all kinds, and enjoyed Opera and local theater at both Mammoth and in Manhattan Beach. Robin is survived by his wife Valerie, his brother Mac, his three children Heather, Wendy and Trevor, his five grandchildren, and his two, soon to be three, great grandchildren. Services will be held at King Harbor Yacht Club at noon on Friday, April 14, 2017. In lieu of flowers, please send donations to the charities listed below. The Felici Trio - http://www.felicitrio.com The Robin Mackay Memorial Trophy at the King Harbor Yacht Club - http://www.khyc.org The Wounded Warriors - https://support.woundedwarriorproject.org