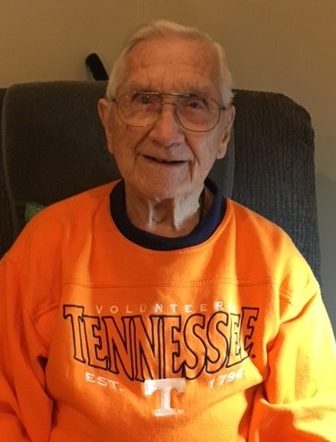 Robert Thurston Jones “BOB”, a long time resident of Manhattan Beach passed away at 98 years old, on October 4, 2020, with family by his side. Bob was born May 19, 1922 in Chattanooga, Tennessee and married Margaret Evelene Whilhoite, the love of his life, July 17, 1942, in Dalton, Georgia.

They had two daughters Diane and Debbie. He started his life long career as a machine shop apprentice until December 20, 1941 when he joined the U.S. Coast Guard Service for convoy duty in the North Atlantic. Upon his return to California, he met the owner of Hi-Shear Corporation and began his new career as Supervisor of the Machine Shop in the Fastener Division in April 1949 and continued working at Skypark Drive in Torrance until he retired in 1984. He was a dedicated and loyal employee and was given recognition on special assignments when the company was establishing a plant in Puerto Rico.

Robert was one of the best story tellers of his life’s adventures and memories of years living in Manhattan Beach since 1952. The family thought they had heard them all, but were always surprised to hear new ones.

He enjoyed boating and taught his family to water ski behind the boat he built, and we hit the river and every lake in between. Golf tournaments and bowling were another way he spent his time. His favorite place to be after he retired was at home in his garage. He loved to putter and fix things himself and was good at it all.

Bob always put the Jonesey twist on everything he did, that’s what made him so special. He made friends where ever he went and always had time to chit chat. We will miss him FOREVER.

He was preceded in death by his wife of 55 years Margaret Evelene and daughter Diane Florentine. Devoted to his family – daughter Debbie Jones and longtime friend Tom Egerer, grandfather to Lee Ann Dennis, Rob and Caryn Remy and great grandfather to Reece Dennis, Jessica, Jake and Josh Remy.

He’s not gone, he’s just gone on ahead and someday we’ll catch up.