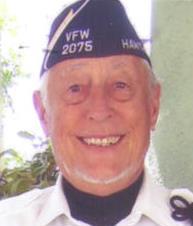 Robert Steinhauer, a 53 year resident of Hawthorne, passed away on Tuesday, April 9, 2013 after a 2 year battle with cancer, surrounded by his family. Born in Chicago, IL on July 6, 1933, Robert was 79 years old. He had served in the US Army during the Korean War and was an active member of the Hawthorne VFW Post 2075 where he was also a former Commander. After receiving a BA from Western Illinois University, Robert moved his family to Southern California where he pursued his passion as an educator with the LAUSD. He attended the University of Southern California completing his Masters Degree in Education and continued taking courses there in advancement of his career. He retired as an Assistant Principal from Fairfax High School. Always actively involved in his communities he served in the Optimist Club, worked with the United Way, the Relay for Life for ASC and various other organizations for the betterment of children in the community and the community itself, always encouraging those around him to help others. He received the Hawthorne Lions Citizen of the Year Award in 2010 for his continued commitment to these goals. He loved to fish and spend time with his family. Robert is survived by his wife of 56 years, Carol Steinhauer of Hawthorne, CA, his daughters, Phyllis Steinhauer of Hermosa Beach and Beverly Steinhauer of Hawthorne, son David Steinhauer of Long Beach, and six of his seven siblings, Conrad, Mary, Sarah, James, Sharon and Catherine as well as brother in laws Jerry, Peter and Paul and sister in law Marlene and numerous nieces and nephews. He was preceded in death by parents, Conrad and Mary Steinhauer, brother John (Jack) and sister in law Janet. In celebration of Robert's life a gathering of family and friends will be held at McCormick Mortuary in Inglewood on Sunday, April 14, 2013 from 4:00 until 8:00 pm and a formal Service held in the McCormick Chapel on Monday April 15, 2013 at 11:00 am. with the burial following at Green Hills Memorial Park. In lieu of flowers, donations may be made to the American Cancer Society or the Hawthorne VFW Post 2075.