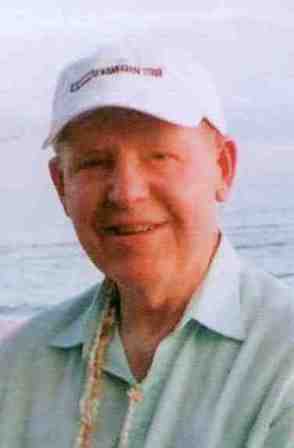 Robert P. Stach, a life long resident of the South Bay, currently of Manhattan Beach, passed away on Thursday, September 6, 2012 in Torrance. Born in Los Angeles, CA Robert was 86 when he died. Robert grew up in Inglewood, CA where he was a proud graduate of Inglewood High School, Class of 1943. In high school he lettered in track and field and went on to attend El Camino College. A dedicated McDonnell Douglas Aircraft employee, he retired after 40 years and thus began a new chapter in his life, traveling. He took many wonderful trips and created great memories for his family. Throughout the years he was a member of the Manhattan Beach Property Owners Association. He worked in their booth at the Hometown Fair cooking and serving food. He enjoyed the simple things in life. You might see him sitting on a bench enjoying his ice cream. Walking was a HUGE part of his life. He took many walks to the pier, concerts in the park, Target and Coco's (where he knew the employees and they knew him.) The Dodgers, USC, and Mira Costa football were his favorite sporting events but he would watch anything to do with sports on TV. Hearing the 40's Big Band music would transport him back into his teenage years and he could not sit still while listening to it! He loved people and could not resist stopping to talk with them, especially the little children giving them a "high five". But by far his greatest passion was spending time with his family and friends. He loved talking and sharing his sense of humor. You could count on him saying "Do you want to go get something to eat?" He was the most devoted and loving husband, dad and grandpa anyone could ask for. He was a cornerstone in Olivia and Brock's lives, especially after losing their Dad at a very young age. Robert is survived by his wife and childhood sweetheart of 64 1/2 years, Barbara Stach of Manhattan Beach, CA; daughter, Janice Dawkins of Chino Hills, CA; grandchildren Olivia Dawkins of Chino Hills, CA; Brock Dawkins (wife Megan) of Chino Hills, CA; sister Marian Vilarino of Cabazon, CA; and sister Dorothy Tiberio of Castle Rock, Colorado. He was preceded in death by his parents Anna and Valentine Stach; brother, William Stach; son in law, David Dawkins. Thank you to Del Amo Gardens in Torrance for the loving care he received while residing there for the last 2 1/2 years. We would also like to thank his dedicated physician, Dr. Paul Brown, who was always available when Dad needed him. Dad, you rest now. We love you and miss you so much but you are now free to walk anywhere you want in Heaven with Jesus by your side. A gathering of family and friends will be held at White & Day in Manhattan Beach on Friday September 14, 2012 from 6:30 to 9:00 pm. The Service will be held the next day, September 15 at the Mortuary Chapel at 1:00 pm. A reception will follow in the White & Day Lighthouse Room until 4:00 pm. Private burial will take place at Pacific Crest Cemetery in Redondo Beach. In lieu of flowers, donations may be made to The Alzheimer's Association.