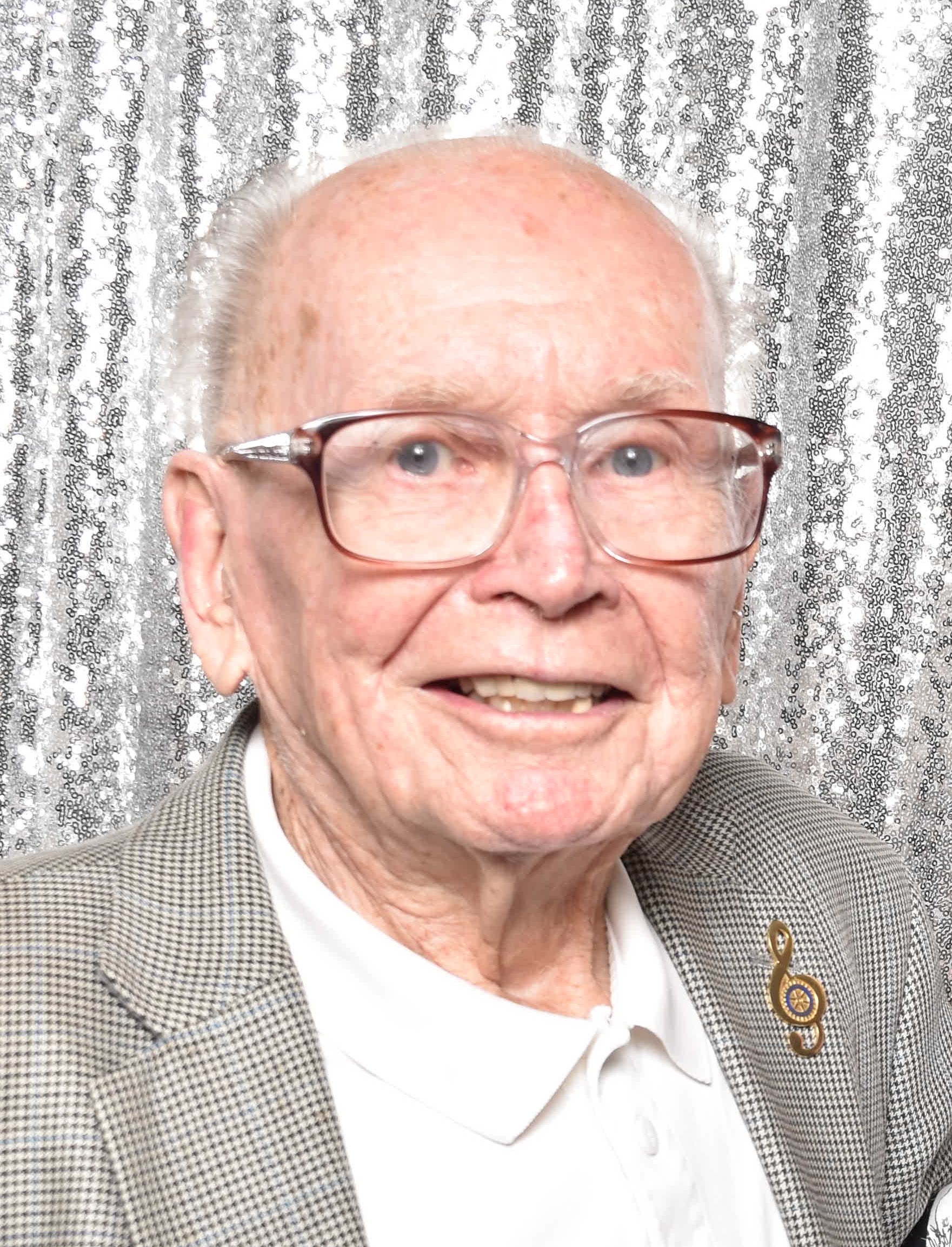 Robert (Bob) LaMar Peterson was born in Los Angeles, California on April 9, 1921 to Giselle and Edgar Peterson. He peacefully passed away at his daughter’s Redondo Beach home on March 5, 2021, 34 days before his 100th birthday, after a short illness.

As a young boy he started a lifelong hobby, playing a mellophone and later the French Horn, first performing in a boys youth band at the 1932 Los Angeles Olympics Opening Ceremonies. He attended Fremont High School and Los Angeles City College. He met and began dating AdaBelle Smith at a Methodist Youth Group in early 1940.

In World War II, he joined the United States Coast Guard and while stationed at Terminal Island, married his sweetheart, AdaBelle, on Halloween, 1942, the first day he could get leave. They were married for 65 years. He soon was shipped to MIT to learn a top secret technology, becoming a LORAN Operator. After being stationed in New York, he spent the last 14 months of the European war stationed on a small peninsula in Greenland sending navigational LORAN signals to Allied ships transiting the North Atlantic. While the isolation had a profound impact on him, he said he was one of a fortunate few WWII veterans who never heard a gun fired in anger.

Upon discharge, Bob returned home to be re-introduced to his daughter, Jean, whom he had not seen since her birth. His father-in-law helped him find a job at the Los Angeles Examiner, where he took over publishing a house-organ directed to the many newspaper boys employed at that time. The quality of his work attracted management attention and, in 1948, he was offered the newspaper dealership in the South Bay, moving his now two children, Jean and Steve, and wife AdaBelle to Hermosa Beach, California.

The growing South Bay area and Bob’s hard work resulted in his dealership becoming the largest in the Los Angeles Examiner (later Herald-Examiner) network. He enjoyed teaching 12 and 13 year olds how to make money selling and delivering newspapers, and at the peak managed over 80 boys, from Manhattan Beach El Porto to Palos Verdes, California.

In 1950, Bob joined Hermosa Beach Rotary, where he remained an active member until his passing. His gregarious nature and great storytelling earned him many Rotarian friends not just locally but around the world. One of his great Rotary memories was attending the 1957 Rotary International Convention in Lucerne, Switzerland hearing Hellen Keller give the Keynote.

In 1950, Bob attended the first rehearsal of the newly formed Beach Cities Symphony. He played his French Horn in nearly every concert over the next 70 years, including the most recent before the COVID hiatus in November 2019. Bob was the Symphony’s Board President for many years. He also played in various Community Theater Orchestras, Church Orchestras and his own Freeman-Valley Woodwind Quintet.

The First United Methodist Church in Redondo Beach also has played a key role in Bob’s life from the time his young family joined in the 1950’s. He became one of its lay leaders and the Church family gave him warm support and strength over the years.

He was a Board Member of the Redondo Beach Salvation Army, for many years and, with fellow Rotarian Mick Felder (deceased) delivered Meals On Wheels.

Bob’s second career began in 1971 when fellow church member Ron Day asked him to join White & Day Mortuary by becoming the General Manager at Pacific Crest Cemetery in Redondo Beach, California. His business acumen and compassionate nature suited him well as he counseled distraught families in burying their loved ones. He retired after 20 years.

Bob is preceded in death by his sister Marjorie Peterson, wife AdaBelle, and grandson Jeffrey Dorler. He is survived by his daughter Jean Chamberlin and husband John Delaney, son Steve Peterson and wife Julia Fretschl, grandson Eric Dorler and wife Danielle, granddaughter Rachael Thompson and husband Tim, grandson Cory Peterson and wife Reyna, along with four great-grandchildren and one great-great-grandchild. Also greatly missing Bob is the second love of his life, Audrie Wing.

Because of COVID restrictions, services will be private. Those who wish to honor Bob are encouraged to give to his favorite charities: the Rotary Club of Hermosa Beach Foundation (hermosabeachrotary.org ), The Beach Cities Symphony Association (beachcitiessymphony.org), the First United Methodist  Church of Redondo Beach (fumcrb.org ), the Salvation Army Redondo Beach (redondobeach.salvationarmy.org).