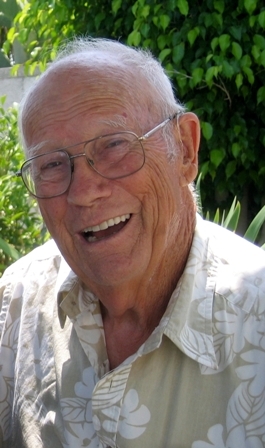 Surrounded by his children and grandchildren, Bob Moore died peacefully in his sleep on Monday, March 27, 2017. A 62-year resident of Torrance, Bob was widely known in his neighborhood, at St. Lawrence Martyr Church parish, and as a coach and volunteer, a story-teller and as a neighborhood fix-it-man. He will be deeply missed. Bob was born in The Dalles, Oregon on April 26, 1923 to George Edward Moore and Gertrude Antonia Fleck. The sixth of 10 children, and the youngest of the 3 boys in the family, Bob attended St. Mary's Academy in The Dalles for all 12 grades. Bob was a veteran, having served in the United States Navy during WWII and the Korean War. He graduated from the University of Colorado, and married his college sweetheart, Carrol. They moved to Oregon in 1949. While in Portland, Bob worked for the Bonneville Power Administration and then he was recruited to work at Douglas Aircraft on systems controls. Bob worked at Space Technologies, Aerospace, and TRW, where he retired in 1992. Notable career highlights included working on Project Mercury (where he got to meet and work with the Mercury 7 astronauts); significant roles on the recovery of an early TDRSS communication satellite; upgrading the satellite system to make it impervious to high energy particle upsets; and near the end of his career being selected as a "designated expert" for a NASA Artificial Intelligence demonstration prototype called "MOORE". In 2002, a minor planet (84200 Robertmoore) was named after Bob. The young Moore family moved to Southern California in late September 1954, several weeks after the birth of their fifth child. In April 1955 Bob and Carrol settled in the Hollywood Riviera section of Torrance, with its' "Redondo Beach" mailing address. Neighbors and colleagues report that Bob was always willing to respond to calls for assistance offering his expertise and latest joke. As volunteers, Bob and Carrol helped to found the Lawrentian Club at St. Lawrence Martyr Church, for parish youth in the mid-1960s, and they assumed other volunteer roles at St. Lawrence Martyr School and at Bishop Montgomery High School. Bob sang in several St. Lawrence Martyr Church choirs for 39 years. Bob helped organize the Riviera Little League baseball program, serving as a coach, chief umpire for 12 years and he was always on the ground crew. Bob was also an AYSO soccer coach and referee for many years. Bob was married for 53 years to Carrol Jantzen Moore, with whom he had nine children, and who died in 2001. Bob is survived by his 9 children – James (Janet) Moore of Oceanside, CA; Paula (Blair) Ota of Irvine, CA; Thomas Moore of Winters, CA; Judith (Kenneth) Kulluson, of Roseburg, OR; Shawn (Lauren) Moore of Santa Barbara, CA; Kevin (Claire) Moore of Pukalani, HI; Maureen (Don) Marino of Rancho Cucamonga, CA; Timothy (Margo) Moore of Long Beach, CA; and Ron (Monica) of Redondo Beach, CA; 21 grandchildren and 13 great grandchildren; his former companion Mary Maellero of Seal Beach, CA; and 3 sisters – Sr. Helen Moore of Lake Oswego, OR; Agnes Brown of Tygh Valley, OR; and Francis McCall of White Salmon, WA. In lieu of flowers, donations may be made in the name of Bob and Carrol Moore to either Bishop Montgomery High School (Torrance, CA), or St. Lawrence Martyr School (Redondo Beach, CA). A Memorial Mass will be celebrated on April 29, 2017 at St. Lawrence Martyr Church at 10:30 a.m., followed by a reception in the church hall. A private internment will be held at Green Hills Memorial Park.