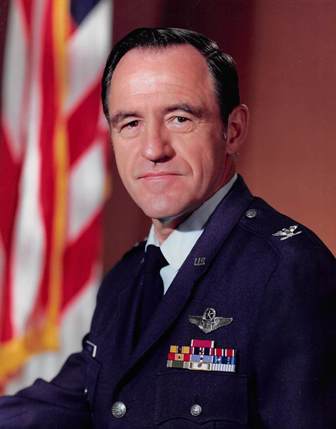 Colonel (Ret.) Robert H. (Bob) Krumpe (1928-2017) Bob was born on July 25, 1928, in Cincinnati, Ohio, and grew up in Wyoming, Ohio. He graduated from Wyoming High School in 1946 and the University of Cincinnati with a BS in Mechanical Engineering in 1951 as a commissioned second lieutenant in the United States Air Force. He then entered the Air Force in the Air Research and Development Command. He entered flight training and received his navigator wings serving in the 98th, 305th bomb wing and the 99th (B-52’s) through 1956. Bob received his MS degree in Astronautics in 1960 from the Air Force Institute of Technology and was assigned to the Air Force Ballistic Missile Division in Los Angeles, California where he assumed his ultimate position as Base Commander of the Los Angeles Air Force Station in 1977. He remained in that position until his retirement in January of 1981. After retirement from the Air Force (30 years), Bob spent 7 years with Martin Marietta, 7 years with McDonnell Douglas, and several more years with Logistics Specialties Incorporated as a consultant. Colonel Krumpe’s many military decorations include the Korean Service Medal, the Air Force Commendation Medal and the Legion of Merit . Bob was married to the love of his life Shirley, for 66 years. He is survived by Shirley, his four children Bob (Fledz), Ken (Janet), Carol (Gary), and Paul (Kati), and 8 grandchildren Marisa (Julian), Matthew, Madison, Brian, Kevin (Lindsay), Tyler, Cameron, and Seeta Michelle as well as two great-grandchildren Addison and Avery. In addition, Bob is survived by his brother Bill (Betty). Bob enjoyed traveling, golfing, bowling, Laker games, watching his grandkids’ sporting events as well as many volunteer Air Force Association activities. In lieu of flowers for the family, please consider a donation in Bob’s name to one of the following charities: 1. The American Heart Association : http://www.heart.org/HEARTORG/Giving/Giving_UCM_001137_SubHomePage.jsp 2. The American Diabetes Association : Donate Now! 3. LMU Men’s Soccer: Donate to LMU Men's Soccer Under designations check the box “ LionsFund for Men’s Soccer"