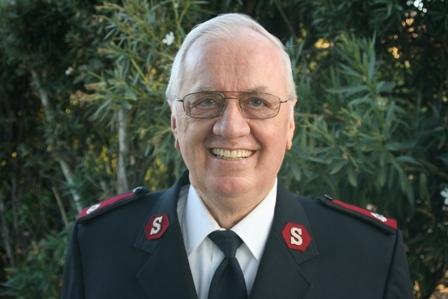 Major Robert E. Smith went peacefully to Heaven seven days after celebrating the 50th anniversary of marriage to the love of his life. As Salvation Army officers for 35 years, Bob and Metta faithfully served in 14 different appointments within the Western Territory. Although enjoying each place they were stationed, the city of Redondo Beach held a special place in his heart. It was at 125 Beryl Street where he, as a young man, accepted Jesus as his Savior. In 1963, Bob and Metta took their wedding vows on the chapel's lawn. Thirty years later, he returned, tasked with the construction of The Salvation Army's Roland Mindeman Center which was completed in 1995. In addition to overseeing this construction and the day to day duties as the Corps Officer, Bob was very active in the South Bay community. He was pleased to serve as a chaplain with the Redondo Beach Police Department and was a member of the Hermosa Beach Kiwanis Club. In 1995, to recognize the couple's service to the South Bay, the Wellness Community named Bob and Metta "Citizens of the Year." In July, 2000, Bob and Metta retired from the work they so very much loved. Throughout his life, Bob enjoyed fishing, camping and cheering for the Los Angeles Dodgers. In addition to his wife, Metta, Bob is survived by his brothers Philip and Donald; his children Michelle, Carrie, Robert Jr. and Robyn and his grandchildren Kaitlynn, Lauryn, Sarah, Megyn and Andrew. The service to celebrate his life will be held on October 5 at 2:00 pm at The Salvation Army, 455 E Spring Street, Long Beach, CA 90807.