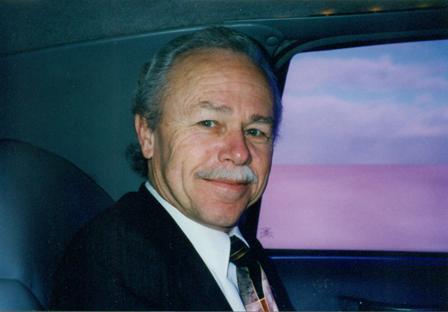 Our family is deeply saddened to announce the sudden death of Bob Vanderhoof. He was a charismatic man whose kindness and caring knew no boundaries. Arriving in San Pedro as a toddler from Appleton, Wisconsin, Bob considered himself a native Californian who enjoyed a childhood growing up in the "rural" Point Fermin area in a family of six sons. Always artistic and curious, Bob liked to draw and build things and for a while was into photography. While working at Marineland and prior to serving in the Army, one of his photos was published in Life Magazine. His passion was designing houses - creating a person's dream home. Bob was a perfect match for his late partner Bill Burchfield. Bill was the practical quiet engineering side and Bob was the chatty creative design side. Their architectural and engineering firm, Vanderhoof/Burchfield, has prospered for over 35 years. The houses and buildings they created can be viewed throughout the South Bay area. He was a wonderful father – funny, patient and sweet. He would do cannonballs, play gorilla, ride the "scary" rides, teach you how to use garage tools and build things, show how to deal with an over-heating car, try his hardest to solve your problem or just be there. Dad could fix or build anything. Well read and witty, Bob liked to talk with any and everyone. He always had a kind word and an infectious smile. If you were stuck in an elevator for three hours, Bob would be the one you'd want there with you. He loved travel and was up for just about any adventure; from bobsledding in Jamaica to zip lining in Montana to running the Rocky steps in Philly. He was a willing, competitive game player. His "thoughtful planning" game style was an amusement and sometimes a frustration for anyone playing with him. Finding solace in swimming, he would effortlessly stroke for miles in a pool or the open ocean. When at the beach, the family would regularly check the horizon for his moving form. Bob was bottom heavy and couldn't float, much to his frustration. His girls, wife Laurie and daughters Susanne and Jennifer, will always hold him dear in their hearts and now cannot fathom a world without him. Family was special to him. His brothers, Skip and Steve, will miss his banter and camaraderie, as will many family members and friends. Visitation will begin at 10:00 am on Sunday April 12, 2015 with a service beginning at 11:00 am. A reception follows for family and friends until 4:00 pm. Bob was generous with his time and money, helping to support a variety of charities. In lieu of flowers, donations may be made to Robert Vanderhoof, PO Box 14414, Torrance, CA 90503.