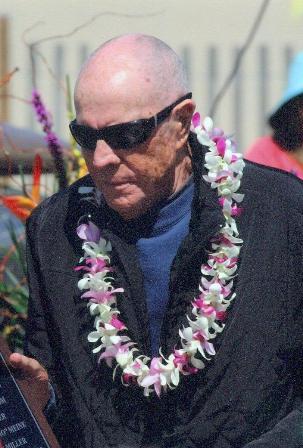 Robert Bergstrom 1927-2015 Born in Los Angeles July 28, 1927 to Clifford A. and Louise (Valotte) Bergstrom, Robert survived his parents, brother, Jack and sisters, Mary Louise Patton and Coralie Ebey. After spending each summer in Hermosa Beach, the family moved permanently in 1940 where Robert spent the rest of his life. He attended Redondo Union High School interrupting his senior year to join the Merchant Marines. Upon his return he was drafted into the Army for a brief period. Robert "The Beach Captain" Bergstrom passed away peacefully at his home on 21st. Street in Hermosa Beach on Saturday August 1st, 2015. He is survived by his loving wife of 56 years, Katharine (Chappelear) and their devoted children Anne Lucas, son-in-law Brent, grandson Grant Chappelear Lucas, Gus Bergstrom, Guy Bergstrom and daughter-in-law, Michelle (Francis). He is also survived by his sister-in-law Elizabeth Tryon, niece Maureen Cardenas, grandniece, Madeline Cardenas and nephew Frank Tryon. Brother-in-law, Mac Chappelear wrote the following heartfelt tribute. "Bob had an enormous impact on the lives of those around him. A lifelong waterman, Bob, his friends and their wives, pioneered a lifestyle of casual beach living that has often been imitated. He was a consummate gentleman and craftsman. He was among the first surfers on the west coast in the mid 1940's. He and his friends built, developed and experimented with surfboard and catamaran designs that they launched from the beaches in and around 21st Street. He inspired many younger men to do the same, many of whom went on to become preeminent in the burgeoning surfing industry. He traveled to Oahu's west and north shores in the early 1950's to be among the first mainlanders to surf its beautiful waves. Many friends and family members served summer 'internships' flipping hamburgers, making shakes and renting surf mats to customers at his mother's "Riviera Grill and Bath House" now the "Bottle Inn" at 22nd Street. He started the first marine supply store in Redondo Beach. Bergstrom's Marine Supply outfitted many of the boats in the newly built King Harbor Marina. He later built custom boats in Marina Del Rey. He became general manager of King Harbor Marine Center in 1972, building a large and loyal clientele of owners of the most famous yachts on the west coast until his retirement in 1995. His easy manner endeared him to all who met him. He played banjo and ukulele and crooned Dixieland standards with his wife, family and friends. He and Katharine, on a daily basis, greeted the dozens of beach goers that filed past their front patio as they came and went from the beach. Mr. and Mrs. "B" could always be counted on to make 'locals' and visitors alike feel welcome. Finally, if the measure of a man's wealth in life can be counted in the love and help and joy he brought to others, then Robert was the wealthiest man on Earth. Robert was inducted into the "Surfer's Walk of Fame" as a member of the "Legendary Pioneers" of surfing in April 2014 at the Hermosa Beach Pier. A fitting tribute to a man who lived and breathed the "Aloha" spirit. Aloha Bergie…" On September 26, 2015 there will be a 1:00 PM Paddle-Out followed by a Farewell in his honor at the Bergstrom Family home on 21st street.