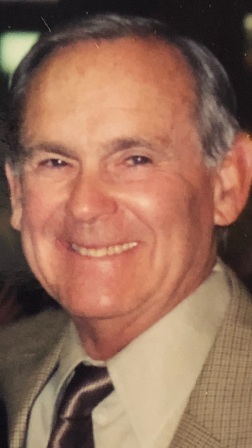 Robert Bassett Raban, son of Robert Baxter Raban and Eula Mae Smith Raban, was born on March 12, 1931, in Oakland, CA. Bob attended schools in Oakland and San Leandro before heading off to Cal Berkeley where he joined the Phi Kappa Tau fraternity and graduated with a B.S. in Business Administration. Bob was a member of ROTC while in college, played in the drum and bugle corps and joined the quartermaster corps, achieving the rank of 2nd Lieutenant after completing boot camp at Fort Lee. After college and the service, Bob sold insurance calling on businesses in San Francisco before being transferred to Los Angeles. Wanting to earn extra money, Bob took a part time job at Bullocks Dept. store where he met his first wife, Harlene Nichols. They had two children, Marcelle Louise and Robert Charles. Bob left the insurance business to work with Harlene’s father at Industrial Valco, serving in executive capacities until his retirement in 1995. Years earlier, Bob and Harlene separated and Bob moved to Hermosa Beach. It was in Hermosa where Bob met his second wife, Sylvia marrying in 1989 and living happily on 19th Street for nearly 30 years. Bob was an active member of the Manhattan Beach Community Church, serving on the Finance Board and a member of Shipmates and Visiting Friends. Bob was also active in the South Bay Cal Alumni group and donated many years of service to the Little Company of Mary Hospital in Torrance, working in the gift shop. Bob was an inspiration to so many, for his dedication to living a “heart healthy” life after suffering a debilitating stroke, enduring multiple bypass surgeries, prostate cancer and various other health challenges. Through it all, Bob exercised regularly with his “rehab” buddies, ate well, and spent lots of time doting on his 11 grandchildren and 5 great grandchildren. In addition to his two children, wife Sylvia, grandchildren and great grandchildren, Bob also leaves behind his sister Beverly Pursley. Funeral services will be held at Manhattan Beach Community Church on June 23 at 11:00am. In lieu of flowers, donations in memory of Bob can be made to the Del Vicario Cardiovascular Center for Excellence, c/o Little Company of Mary Hospital, 4101 Torrance Blvd, Torrance, CA 90503, where Bob received excellent care for many years by the talented and compassionate staff.